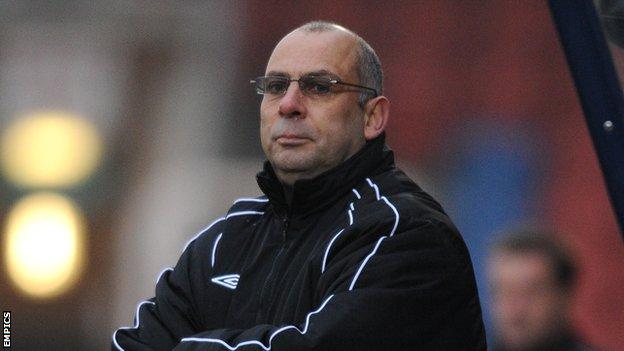 Woking manager Garry Hill says his playing budget will not be increased for the new Conference Premier season.

The Cards finished 12th in their first campaign back in the top flight of non-League football since 2008-09.

Hill told BBC Surrey: "There is no change. Any football manager at any level always wants a little bit more to go and work with, but it's not to be.

"I do respect that the security and safety of Woking is far more important than people running away with egos."

Former Dagenham & Redbridge and Weymouth boss Hill was appointed Woking manager in January 2011 and led the part-time side to the Conference South title in 2011-12.

After three years away from the top tier, Hill feels it is important the Kingfield outfit do not over-stretch themselves financially.

"Everyone is working hard to make sure Woking are going in the right direction," he added.

"We have been made aware the club have to be self-sufficient and have stability in the league over the next two to three years.

"The average budget in the Conference in £600,000 and you have got probably six to eight clubs with budgets of £1m-plus.

"We probably find it more of a challenge to fight against the big boys and the bigger budgets and try and achieve what we set out to do.

"It is a hard handicap but it is a great football club and we [Hill and assistant Steve Thompson] are very happy at the club."