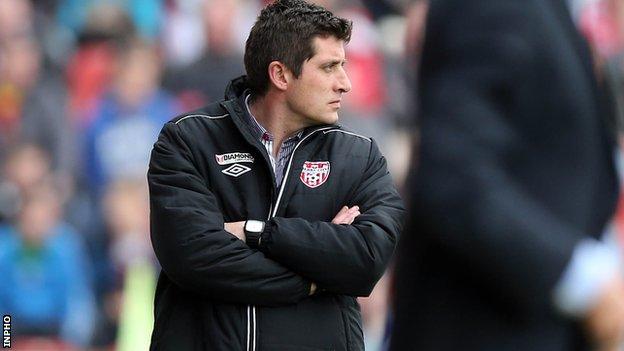 Derry City kept pace with League of Ireland leaders St Patrick's Athletic thanks to this Simon Madden-inspired 2-1 win over Bohemians.

The Candystripes got off to the perfect start when Patrick McEleney drilled home from 12 yards.

Kevin Devanney replied for Bohs just before half time, before Michael Rafter scored to round off a fine Derry move.

Derry remain three points behind St Pat's with a game in hand as the title race gathers pace.

At the Brandywell, the hosts went ahead after only eight minutes when the impressive Madden picked out a deep cross to McEleney, who took a touch and lashed an unstoppable volley past Dean Delaney.

Patrick Kavanagh and Michael both tested Delaney with efforts from the edge of the area, while Karl Moore had two opportunities to level for the visitors.

The equaliser duly arrived in the 42nd minute, when Michael Barker's cross was turned back to Devanney by Ryan McEvoy for the winger to lift the ball into the roof of the net.

Declan Devine may well have been worried going in level at interval, particularly given a failure to win in their last two home League outings.

The Candystripes retook the lead after 54 minutes, Madden this time skilfully beating his full-back to deliver a pinpoint cross that Rafter simply had to divert into the net.