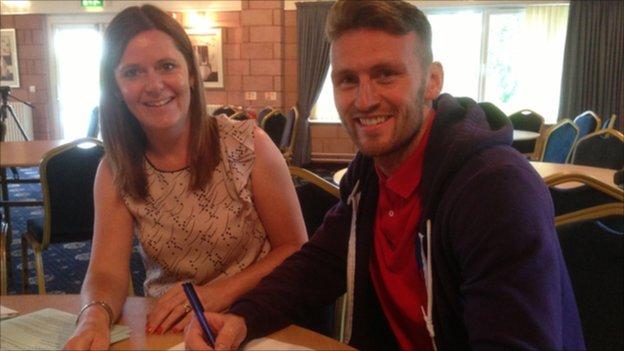 Miller, 30, who scored 24 goals in 60 games, also has an option to extend his stay at Brunton Park for a further 12 months.

"Buzzing to get to into pre-season and concentrate on football," Miller posted on Twitter.

Meanwhile Gateshead winger Josh Gillies, 22, will join the Cumbrians on a two-year deal after the two clubs came to agreement over compensation.

"There could still be some minor issues to resolve," Carlisle managing director John Nixon said.

"However all parties are now happy with the situation and we are in a position where Josh can sign his contract."

The Miller deal ends a protracted series of negotiations for United boss Greg Abbott, who had feared losing the striker this summer.

"We know what he brings to the side when he's playing at the top of his game and we also know that he likes being here," Abbott told the club website.

"He brings a lot to the team and the dressing room and we're delighted that we have got this sorted.

"He can knuckle down and concentrate on his football now and we're really looking forward to working with him again this season."