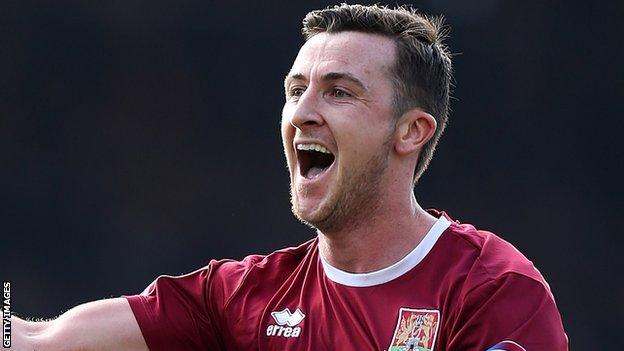 The 27-year-old joined the Cobblers in January following his release by Coventry City and went on to score six goals in 19 appearances.

"He was terrific for us, particularly towards the end of the season," boss Aidy Boothroyd told BBC Radio Northampton.

"And with a full pre-season under his belt, I think we have got a real player there."

My job is to get the best out of the budget

Defender Nathan Cameron is still to decide on his future and Boothroyd warns that the offer will not stay on the table indefinitely.

"Negotiations continue," he said. "But there comes a time where you draw a line under it.

"I'd love him to sign because his performances in the play-off semi-finals were fantastic. He needs to come to the right club, he needs to have the right manager and coaches and he needs to be pushed."

"Luke and Ben did very well for us," said Boothroyd. "The next question which comes is, 'why are you offering them less money?'

"But my job is to get the best out of the budget. I wanted them to stay, and that's why I made them offers, but I'm not surprised they've turned them down and I respect both their decisions."

A midfielder and a striker are top of Boothroyd's shopping list, ideally arriving before they leave for a pre-season training camp in Croatia on Sunday.

Alex Nicholls is continuing his and last season's top goalscorer Adebayo Akinfenwa left the club in May.

"I still think we need perhaps another striker, someone who can play in a variety of positions," he said.

"Alex Nicholls is coming on very well. It has taken time, we're not going to rush him. he's rushing himself, that's the type of lad he is.

"He'll be like a new signing in the January transfer window but a central midfielder is what we need."