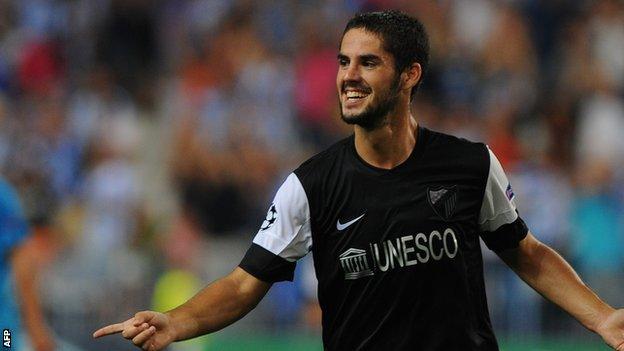 Real Madrid have reached an agreement with Malaga to sign Isco on a five-year deal, for a reported fee of £23m.

Manchester City were also pursuing the midfielder, 21, with new manager Manuel Pellegrini hoping to lure him to England having been his boss at Malaga.

Isco, who recently won the Under-21 European Championship with Spain, is due to have a medical on 3 July before being presented at the Bernabeu.

Isco was signed by Pellegrini from Valencia in 2011 and had suggested he wanted to play under him again next season, calling his former boss a "footballing father".

Isco is a lifelong Barcelona fan and has a dog called Messi, but he grew up idolising Andres Iniesta - and it shows.

Like his hero, the Malaga star is a mesmerising dribbler who possesses balletic balance and can slice open any defence with a sudden burst infield from the left wing followed by a perfectly released pass or accurately curled shot. Frighteningly, one area where he's even better than Iniesta is goalscoring.

The playmaker signed a new contract with Malaga at the beginning of the year, which included a £30m buy-out clause.

Asked about Isco at a news conference on Wednesday, Ancelotti said: "From what I have seen of him, it's clear he has a lot of quality.

"Spain's Under-21 side has a lot of great players and he is one of the best. He could get into any team in the world, so he could also play for Madrid."

Isco - real name Francisco Roman Alarcon - scored three goals in five games as Spain triumphed at Euro 2013 in Israel, but also made his senior international debut against Uruguay in February.

He was the winner of the prestigious European Golden Boy award in 2012, and last season played a major role as Malaga reached the quarter-finals of the Champions League - losing narrowly to eventual finalists Borussia Dortmund.

He made 45 appearances in all competitions for Malaga last term, scoring 12 times, as they finished sixth in La Liga.