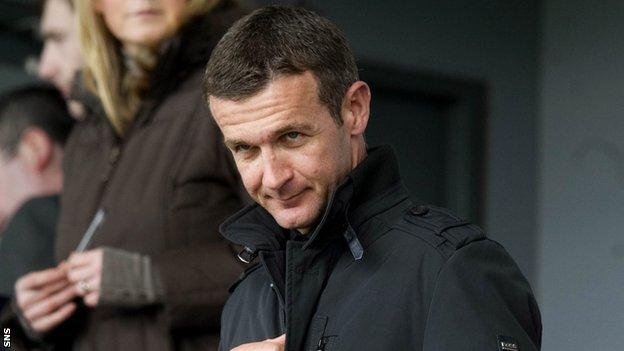 Queen of the South have named former Dunfermline boss Jim McIntyre as their new manager.

The 41-year-old, who spent much of his career at Dundee United, was most recently first-team coach at Bristol City under Derek McInnes.

McIntyre said: "I'm thrilled and delighted to be here."

"He is a young, experienced manager who has an expansive attacking view on football," said a statement on the club's official website.

The Second Division champions have been searching for a new boss following Allan Johnston's departure to take the reins at Kilmarnock.

"We are expecting him to build on the playing style of the current squad," Queens added.

Former player Barry Wilson ruled himself out of the running for the job on Wednesday.

McIntyre said he was relishing the challenges ahead in his new role.

"I'm thrilled and delighted to be here. It's a great opportunity for me to get back into the management game," he said.

"I'm a football person and whether that's a manager or being a coach; we're all football people and love the game.

"I'm delighted to be back and coming to a club as progressive as Queen of the South."

McIntyre was appointed caretaker player-manager at the Pars in 2007, following the dismissal of Stephen Kenny.

He was appointed manager on a permanent basis in 2008 and led Dunfermline to the First Division title in 2011.

However, the Fifers struggled in the top flight, and McIntyre parted company with them in March 2012.