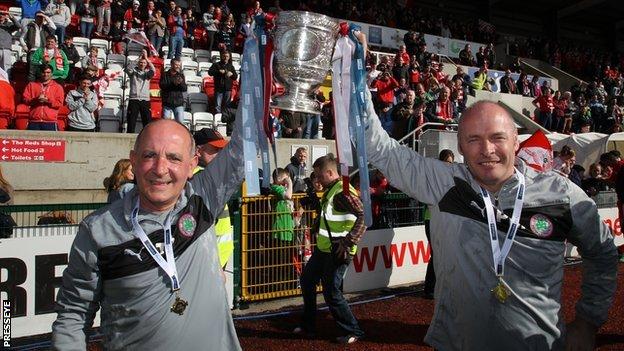 Cliftonville will begin the defence of their Irish Premiership title against promoted Championship One winners Ards at Solitude on Saturday 10 August.

The opening series of fixtures sees Portadown entertain Linfield, while Glentoran are at home to Coleraine.

Warrenpoint Town, who beat Donegal Celtic in the play-off, face Dungannon Swifts at Stangmore Park, where both sides will play their home matches.

The second group of matches on 17 August includes the first clash of the season between Linfield and Cliftonville at Windsor Park and a meeting of the two promoted clubs, Ards and Warrenpoint, at Clandeboye Park.

Much attention will focus on the Boxing Day derby games, with Ballinamallard, Coleraine, Crusaders, Glenavon, Glentoran and Warrenpoint enjoying home advantage for the festive fixtures.

The Premiership season will again involve 38 matches for every club, with the top six and the bottom six sides splitting into two groups after each team has played 33 games.

The 2013-14 season sees the launch of the Northern Ireland Football League as the organising body for the Premiership, Championship and League Cup, as well as the Reserve League and the Youth League, with responsibility for the administration and commercial rights of these competitions.

The stated aim of the new umbrella structure is to be "an open and transparent organisation with the aim of developing vibrant and exciting leagues and cup competitions for clubs, players and fans alike".

Meanwhile Danske Bank have agreed a one-year extension to their sponsorship of the Premiership.