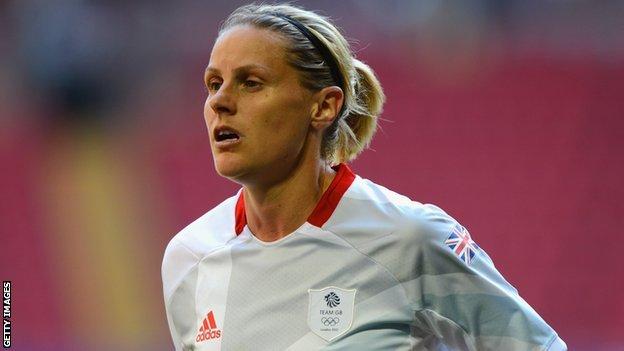 England boss Hope Powell says she is not afraid to leave out star names if they are not fit for next month's European Championship in Sweden.

None of the five took part in the 1-1 draw with Japan on Wednesday.

"We don't want a situation where they do further damage. If we have to offload players, we will," said Powell.

"We played the Dutch behind closed doors on Monday. It was a friendly and players got minutes and that's the most important thing."

England travel to Sweden on Monday, which is also the deadline for final squads to be submitted, before facing the hosts on 4 July in a pre-tournament friendly. But Powell can replace any player up until their first group game against Spain on 12 July so long as medical reasons are submitted and agreed with Uefa.

Smith was the only player not present at the friendly game at Burton Albion's Pirelli Stadium, in which Eniola Aluko scored the opener before world champions Japan equalised late on through Nahomi Kawasumi.

The remaining quartet of injured players all took part in the warm-up before the game but Powell said she did not want to take any risks with Smith, 34, who has not played since picking up an injury for Arsenal on 20 March.

England's match against Japan kicked off at 13:45 BST - because Japanese TV insisted it was available for their primetime audience where viewing figures of 15 million were expected.

Powell added: "Kelly is still here and doing everything that everybody else is doing. I don't want her to warm up, she is loaded enough."

The England boss described the draw against Japan - silver medallists at the 2012 Olympics and ranked third in the world - as a "decent result".

"We are not always going to win, but we are difficult to beat and I think that goes a long way in saying what the squad have got in terms of potential and the desire to succeed, and that's important in tournament play."