In the moments after the final whistle it became clear just how much reaching the Confederations Cup final meant to this young Brazil team.

A final at the famous Maracana in Rio de Janeiro is, as David Luiz said afterwards, a dream come true.

They wept, milked the jubilation and basked in the warmth of their adoring, football-mad public. And yet, there was a realisation that this was a victory devoid of that customary fluency and flair. For long periods, they lacked confidence and cohesion, creativity and cutting edge.

This was a battle from start to finish, a scrap with a Uruguay side hardened in the heat of battle, a side that manager Oscar Tabarez sent out to win at all costs. And yet Brazil still found a way to come through.

For much of this white-hot contest at Estadio Mineirao, Luis Felipe Scolari's side looked burdened by expectation, a team struggling with the pressure of uniting a nation with a victory that many expected.

Across the world they were criticised for not reproducing the brilliance of Brazil gone by. "Is this it?" they said. "Is this the brilliant Brazil so many people are getting excited about? Is this the best they can do?"

And yet the Selecao are judged by standards no others have to live up to. It is not just about winning but how they win. Not just about getting the result, but how they get it. History has set the bar so very high.

"It might come back to haunt me but I can't see how they can win the World Cup next year. They are well short of class and flair, with players who are overrated. One man who isn't overrated is Neymar."

Many people are talking up Brazil's chances of winning the World Cup next summer, but they are not.

Three times in this tournament, Scolari himself has told the media that his side "still has a long way to go to reach the level of the top four or five teams in the world". And the players themselves are in agreement.

"We are growing, improving game by game," Luiz told BBC Sport after the match.

"Sometimes you cannot play the game you want. Sometimes you will not get a lot of possession, a lot of opportunities and the chances to show fantastic skill. But that is why this Brazil team is more mature."

Amid the hype that follows Brazil around, it is easy to forget this is a young side still feeling its way, still building for a World Cup that is a year away and remains the be-all and end-all for Scolari and his team.

Right-back Dani Alves, at the age of 30, is the oldest outfield player in the squad. This is a team aiming to peak in 2014.

"We are growing in confidence. Because we can play games like that, when it is difficult, and we can find a way to win. Or we can play open games. It is something that gives us all confidence," the Barcelona player said.

Until now Neymar had proved the inspiration with his class and creativity, conjuring moments out of nothing and winning games with a single swing of his left boot. Against Uruguay he cut a frustrated figure. There were tumbles and tantrums, spiky exchanges and moments of genuine frustration from the 21-year-old. On social media, Neymar's army of critics lined up to gloat but no player shines in every game. 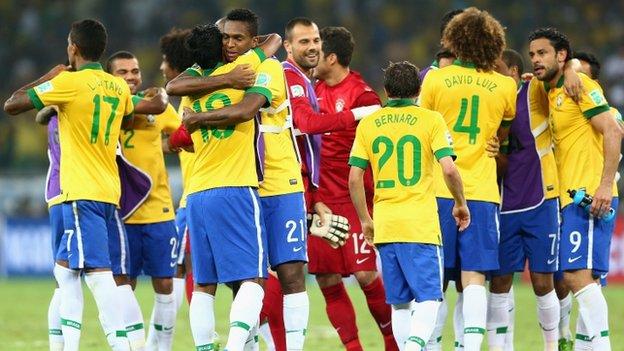 It is worth remembering that Brazil's boy wonder is the most fouled player in the tournament and yet he enjoys the physical aspect of the game and when the ball is at his feet just about anything is possible. Neymar will come again, but at such a tender age he will learn and improve at a rate few can match.

But he will not shine in every game, he will not decide every contest with a wonder goal to grab headlines.

Just a few months ago, this nation of 200 million managers, as it is know, feared being humiliated by Germany, Spain and, worst of all, Argentina as hosts of the World Cup. Scolari was not a popular figure, he was picked on and made fun of. The Selecao were not a source of pride as they are now.

Many here see the draw with England earlier this month as a turning point. As the moment Scolari has lifted them from those depths and gave them hope and with it power and purpose. The Confederations Cup has been a platform for the genesis of this side, it has allowed Scolari to find his XI and to show the world that they might, just might, be the team to beat next June. But no-one here would countenance that suggestion yet.

"The team was is maturing," Luiz added. "Felipao spoke to us before the game about everything about how to win the game. He knew how Uruguay would play against us but although it wasn't easy, I saw a team fighting for 90 minutes. It wasn't a great game but it was a great game for us mentally, a step."

Defensively, Brazil remain prone to lapses of concentration that will be punished by the very best. Captain Thiago Silva gave the ball straight to Edinson Cavani for Uruguay's goal while Luiz himself later admitted he had hauled Diego Lugano for a first-half penalty that Diego Forlan was unable to convert.

Before the game, Lugano had claimed Brazil had abandoned the jogo bonito - beautiful game - but the truth was that in Belo Horizonte they were forced to abandon it by a Uruguay side intent on disrupting the flow. And yet at the final whistle, it mattered not.

When Luiz spoke after the match about playing for Brazil at the Maracana in a game that may actually mean something, he struggled to hold back the emotion. "It is a dream for me," he said. "A dream come true.

"It is the first final for this group of players but now we need to win."

Brazil might not have convinced the world they are ready to sweep all before them on their way to World Cup glory next summer but they did enough to prompt Tabarez to suggest his side had been beaten by a "great" team. They may be taking the praise a little too far because this is a team in development, but a team that has shown that even when their customary class and creativity desert them, they can find a way to dig out the victory. Scolari's side of 2002 found a very similar formula, of course.

Spain may yet prove a step too far for this young Brazil side on Sunday, but in 12 months' time, they will fear no-one.