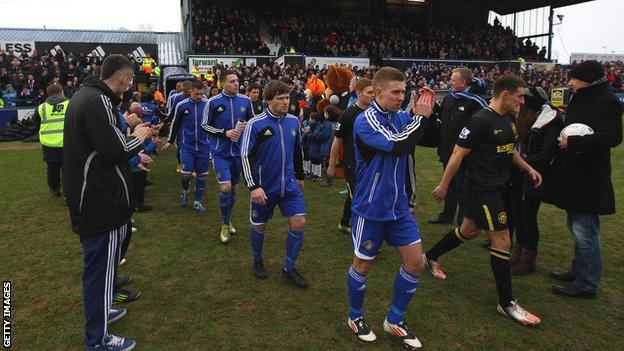 Macclesfield Town have withdrawn their offer of a chance to play for the club in return for payment.

A £20,000 donation could have led to a successful applicant making a 10-minute appearance in the league or cup.

However the club ended the scheme and apologised for an "error of judgement".

It added: "We now recognise that it creates a possibility of altering the outcome of a competitive fixture and clearly crosses an important line with respect to the integrity of the game."

In a statement, the club continued: "We are therefore withdrawing the offer and would like to apologise unreservedly to the football authorities and to the Football Conference for our error of judgement in this matter."

Macclesfield are in a perilous financial position and

"The 'pay to play' proposal was one of many innovative ideas that have been considered in the last few weeks to raise both funds and interest in the club. It was intended to be a light-hearted idea that would be of interest only to our local media," the club said.

Earlier this month, Cheshire East Council gave the club £285,000 for the freehold of their Moss Rose ground.

Without those funds, associate director Andy Scott said Macclesfield would have been close to being handed a winding-up order, having ended last season £500,000 in debt.

following a restructure of the club.

Before halting the scheme, Macclesfield had stressed that the appearance would happen at a convenient time during a match and would not significantly affect the team.

"We haven't got Manchester United's bank balance. We've got Macclesfield Town's bank balance, which is pretty desperate to say the least at the moment," Scott told BBC Radio Manchester. "If the club was in a strong financial position, perhaps we wouldn't even consider it."

Town were relegated from League Two in 2012, ending their 15-year stay in the Football League, and finished 11th in the Conference last season, although they earned significant funds from a run to the fourth round of the FA Cup - their best-ever performance in the competition.

Non-playing supporters featuring for their club is not a unique occurrence.

In 2003, Doncaster owner John Ryan appeared as a substitute in the final minute of their last league game of the Conference season at Hereford, and at the age of 52 years and 11 months became the oldest man to turn out for a professional club in England.

The Football Conference said they had not received any official notification of Macclesfield's plan and were unwilling to comment further.