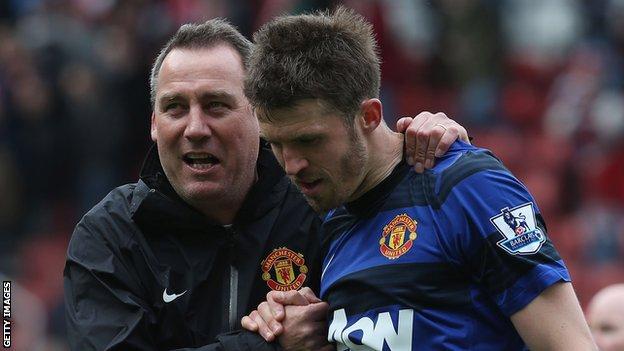 Manchester United have confirmed the departure of first-team coach Rene Meulensteen after 12 years at the club.

The 49-year-old had been at the club since 2001, bar a short spell in charge of Brondby in 2006-07, and became United first-team coach five years ago.

has yet to finalise his backroom staff.

"I'd like to thank Sir Alex Ferguson, the owners, colleagues, players and fans who made my time at Manchester United very special," Meulensteen said.

Meulensteen, who had been linked with the manager's job at Wigan before helped United win the Premier League three times and the Champions League once during his spell as first-team coach.

"This is football and sometimes these changes have to take place," the Dutchman told Sky Sports. "I hope United go on to experience as much success as I have under David Moyes."

Executive vice-chairman Ed Woodward said: "I'd like to thank Rene for his contribution to the club.

"He has been first-team coach for five years and in that time has given great assistance to Sir Alex Ferguson and Mike Phelan in keeping the team at the top of the game not only in this country but in Europe as well."