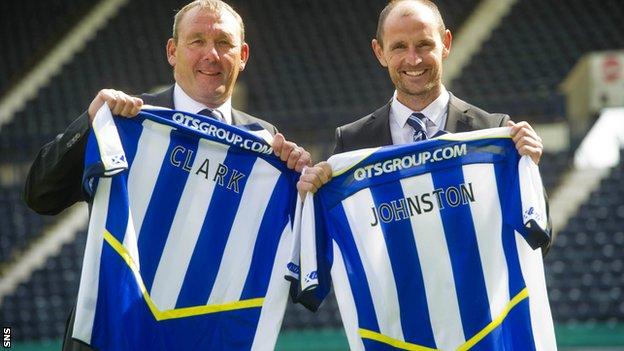 Kilmarnock's new manager Allan Johnston will aim to sign six new players and admitted taking over at Rugby Park was "too big an opportunity to turn down".

The 39-year-old was announced as successor to Kenny Shiels on Monday.

"Hopefully we can look to bring in six players at least," said Johnston. "We've got some really good promising young players coming through as well.

"A lot of players left the club over the last season so there's a lot of rebuilding to be done."

Central defenders are the priority in terms of player signings, but additions are expected in midfield and attack as well.

Johnston and his assistant Sandy Clark signed two-year-deals at Rugby Park after leaving Second Division champions Queen of the South.

We're not going to sit back and try and defend, we'll try to be on the front foot closing teams down.

"It was a really hard decision," explained Johnston. "It was a massive decision to leave but it was too big an opportunity to turn down.

"It's going to be difficult, it's not going to be an easy job, especially the first year. But I've got somebody with the experience of Sandy alongside me and we're hungry to do well.

"We're not going to sit back and try and defend, we'll try to be on the front foot closing teams down.

"Hopefully we can win them [the fans] over by playing attacking football."

Kilmarnock chairman Michael Johnston had been seeking a new manager since sacking Shiels on 11 June.

And his capture Allan Johnston was voted the PFA Scotland manager of the year.

"Allan's had a very illustrious career as a player," said Johnston.

"One of the big attractions for me was the fact that he played 115 games at Kilmarnock over a five-year period. Everybody's got good memories of his time here.

"He knows Scottish football from top to bottom, as does Sandy. Over the last year, Allan and Sandy have had fantastic success, winning two trophies.

"So while that would be nice next year, we're not going to expect too much too soon.

Johnston also said his new manager would have financial support to bring in new players.

"We've discussed that in some detail and so he knows that I'm fully supportive of what he wants to do and the number of players he wants to bring in," he told BBC Scotland.

"He worked on a tight budget at Queen of the South, so he'll have more money here than he would have had there."