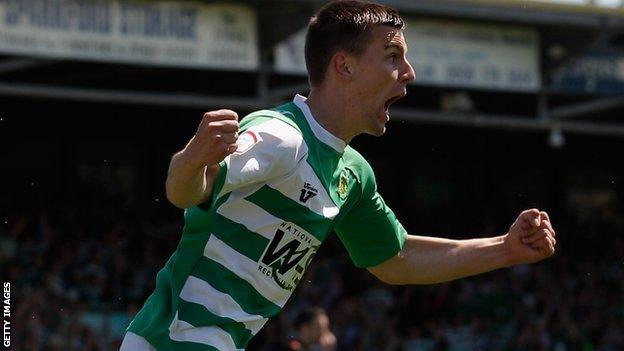 Yeovil have handed new deals to midfielders Kevin Dawson and Sam Foley, and have completed the signings of Sam Hoskins, Joel Grant and Joe Jones.

Dawson, 22, and Foley, 26, helped the Glovers win the League One play-off final against Brentford at Wembley.

Both have agreed deals to stay at Huish Park until 2015.

Former Southampton striker Hoskins, Wycombe midfielder Grant and ex-Leicester defender Jones were all out of contract at their previous clubs.

Hoskins signed a professional deal at Southampton in 2011. He previously spent time on loan at Preston, Rotherham and Stevenage.

Grant started his career at Watford before signing for Aldershot. He joined Crewe for £130,000 in 2008 and left to join for Wycombe in 2011.

Hoskins, 20, was released by the Saints this summer having spent time on loan at Stevenage last season, where he made five starts and eight substitute appearances, scoring one goal.

Both he and Grant have signed two-year deals at Yeovil.

Winger Grant was offered a new contract at Wycombe, where he has spent the last two seasons, but turned it down to join the Glovers.

Jones, 19, who has signed a six-month contract, came through Leicester's development squad but failed to make a first-team appearance for the Foxes.

Dawson arrived at Yeovil from League of Ireland side Shelbourne at Christmas, having been recommended to the club by striker Paddy Madden.

He made 24 appearances last season and scored the opening goal in the play-off semi-final second leg against Sheffield United.

Foley left Conference Premier side Newport to join the Glovers last summer and scored seven goals in 51 games during the 2012-13 campaign.