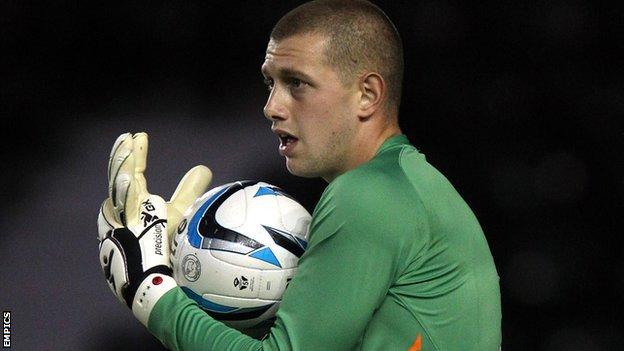 Bristol City have signed goalkeeper Frank Fielding on a three-year deal from Derby for an undisclosed fee.

Fielding, 25, had a year left to run on his contract at Pride Park but a groin injury meant he lost the number one jersey to Adam Legzdins last season.

League One-bound City have been looking to bring in a new keeper after Tom Heaton signed for the Clarets and Dean Gerken was released.

"It's a good club for him and I think they've got a very good chance of being promoted," Clough told BBC Radio Derby.

"He lost his place through injury and Adam did very well so he couldn't get back in.

"He was frustrated. Some players want to be out there week in, week out and Frank is one of them."

Fielding, a former England Under-21 international, started his career at Blackburn but gained much of his first-team experience on loan at Wycombe, Leeds, Rochdale and Northampton.

After a three-month spell with Derby, he secured a permanent move in June 2011.

Fielding made a total of 80 appearances for the Rams, with his last appearance coming against Peterborough on 20 April, in which he was sent off in the second half.

"He's a good height, his distribution is good and he has plenty of experience at Championship level, even with the England full squad."