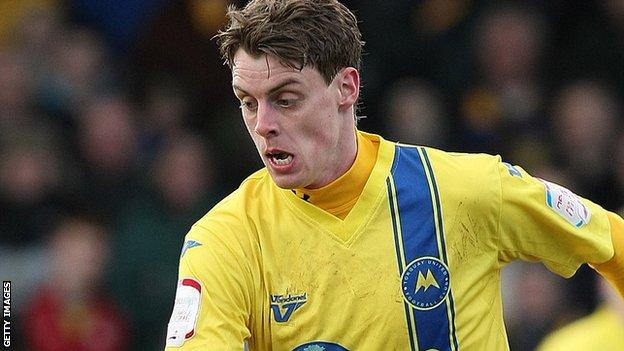 Northampton Town are to sign Torquay's Ian Morris, but Luke Guttridge and Ben Harding are leaving the club.

Morris is a left-footed player who can fill a number of positions and was out of contract at Plainmoor.

"He has always impressed me when I have seen him and I am pleased we have been able to bring him to the club," said Cobblers manager Aidy Boothroyd.

The 26-year-old's arrival is balanced by the loss of Guttridge and Harding, who have both turned down new deals.

Guttridge made 30 appearances for Northampton last season and scored in the League Two play-off semi-final against Cheltenham as they secured a trip to Wembley.

Harding and Guttridge are two completely different players. One sits in the centre and sprays the ball around and the other is a box-to-box man, so it'll be interesting to see what Ian Morris brings.

Unless they're trimming down the playing squad, if two midfielders go, you'd bring two in - but they do have the likes of Ben Tozer, who can play in there.

I'm pleased about goalkeeper Matt Duke signing. That was my main concern. After that, everyone wants a 20 goal a season striker. But I want to see a domineering centre-back come in.

The 31-year-old originally joined the Cobblers in 2008 and returned in January 2012 after a spell with Aldershot.

In February 2013, he described himself as "completely comfortable" at Sixfields, but is now set to continue his career elsewhere.

Harding, 28, was signed from Wycombe Wanderers on a free transfer in January 2012 after a short loan spell and despite an ankle injury, managed to play 41 games last season.

"They have both played major roles in helping us avoid relegation the season before last and then getting to Wembley last season.

"We made both players offers at the end of last season, but both feel the offers are not what they are looking for and we fully respect that," said Boothroyd.

"Just as they will move on, we have moved on, we are in talks with our midfield targets and we are looking forward to the start of pre-season on Friday."

The signing of Morris provides compensation and he will be hoping for an injury-free season ahead after missing four months of the last campaign after an Achilles injury in training.

"Ian is a very good player and I have followed his career closely," added Boothroyd.

"He is a winner, he has already won three promotions in his career and he has experience of playing in the Championship, League One and League Two."