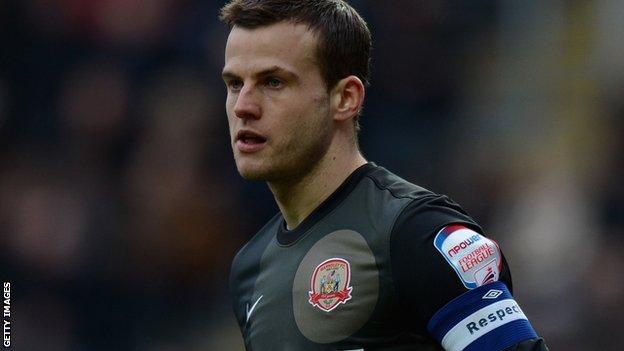 Goalkeeper Luke Steele has given Barnsley a major boost by signing a new two-year contract, keeping him at the club until the summer of 2015.

He told the club website: "Seeing the signings of all the players that did so well last season was important to me.

"Often at the end of a season I have been used to a lot of players going out and new ones coming in, but this year it hasn't been the case."

Earlier this month, Barnsley manager David Flitcroft said he expected Steele to depart Oakwell amid speculation he was being monitored by numerous clubs.

The keeper began his career with Peterborough United, before being signed by Manchester United in 2002 for £500,000. After a loan spell at Coventry, he moved to West Bromwich Albion in 2006.

Steele continued: "I think it's very important to get that level of consistency which we have now, and it feels like we can carry on where we left off from last season.

"Everything feels so positive at the club just at the moment which is great. The last day of the season against Huddersfield was my best day in a Barnsley shirt.

"The players here know how to win games, we got ourselves on a good roll in the second half of last season and it's great we have those same players coming back.

"I'm sure when we all start talking about those special times it will have a very positive effect on us as we go into the new season."