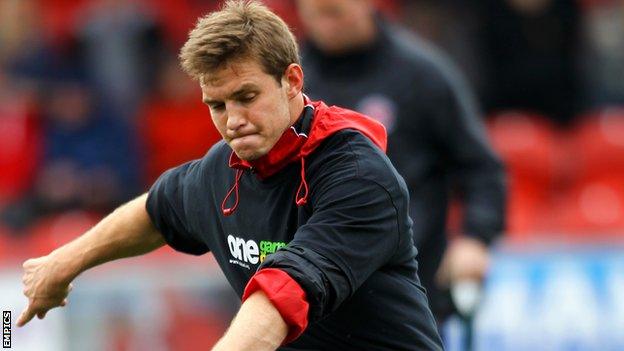 Fleetwood Town will meet with Gerard Kinsella later this week to discuss his future with the League Two club after he received a two-year drugs ban.

Kinsella, who has yet to play a first-team game for Fleetwood, has 12 months remaining on his contract at Highbury.

"It's a very disappointing situation for everybody and there are no winners here at all," chief executive Steve Curwood told BBC Radio Lancashire.

"The lad has done something which he now obviously regrets. It was something he shouldn't have done and we've got to feel for him because his career, albeit short so far, has now gone into a serious decline."

Kinsella admitted a Football Association charge, having provided a positive urine sample during an 'out-of-competition' test in February.

He said the positive result came after his cousin twice injected him with Durabolin to relieve the pain from a shoulder injury.

His cousin, taxi driver Neil Kinsella, told an FA commission that he used Durabolin himself as a painkiller and was not aware it was also known as nandrolone - a performance-enhancing drug which reduces fatigue and promotes muscle growth.

The two injections took place at the player's home on consecutive days at the end of December 2012, shortly before he moved on a month's loan to non-league AFC Telford, where he played seven times.

The FA concluded that the former Everton trainee had been "significantly at fault" for failing the test, having determined he made "no proper efforts" to establish what the substance was and whether it was prohibited.

Curwood continued: "He's been a good lad around the place, a great professional and a great prospect, although he hadn't quite broken into the first team.

"Of course, this is a very serious issue. He's received a two-year ban and we've got to take that into account. We'll sit down with him and his representatives towards the end of this week to discuss what is generally a sorry situation for everybody.

"We've got high standards at our football club. We've got a detailed and serious medical department who look at these issues and we're confident it is an isolated issue."