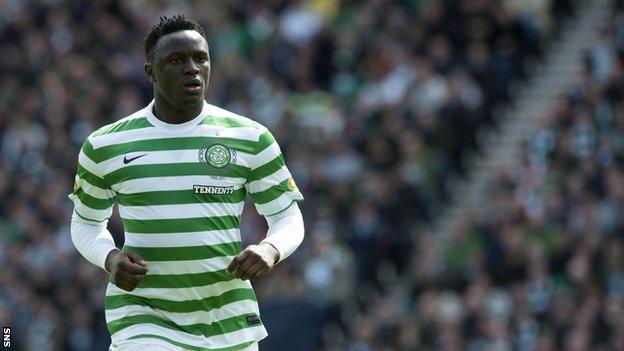 Celtic manager Neil Lennon is targeting two more signings in the summer but is resigned to losing midfielder Victor Wanyama.

Wanyama has been linked with a move to England after Celtic accepted a £12m offer from Southampton.

Lennon is unhappy with criticism from Wanyama's representative that he was being forced into a move.

Personally, I think it'd be a very good move for Victor, in terms of his career going forward

"All we've done is accept a bid from Southampton; a very good club and progressive club," said Lennon.

Wanyama's representative Ivan Modia had stressed the midfielder would not be pressured into a transfer.

However, Lennon said: "Personally, I think it'd be a very good move for Victor, in terms of his career going forward.

"But there seems to be other parties wanting to block the deal. These negotiations take a long time. We felt that the money was right for us and was a good business deal for the club.

"Whether it resurfaces again, I don't know."

Wanyama, who joined Celtic for £900,000 from Beerschot in July 2011, has been attracting interest from clubs in England.

In October, Lennon revealed that Wanyama had rejected the offer of a new contract beyond the four-year deal he signed when joining Celtic.

Lennon remains hopeful Anthony Stokes will sign a new deal and says there has been no renewed offer from Hull City for Gary Hooper.

And the Celtic boss stressed that goalkeeper Fraser Forster is not for sale.