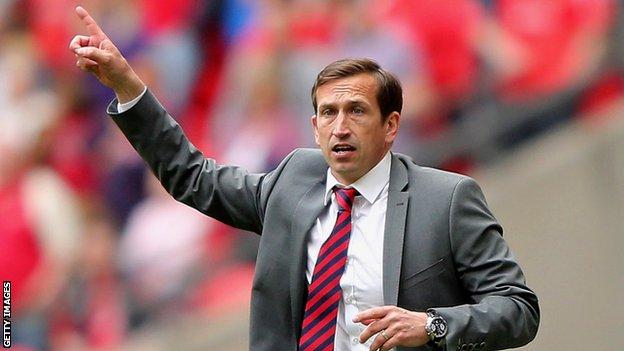 Newport County manager Justin Edinburgh hopes to tempt some of Cardiff City's players to join his side next season.

Edinburgh says he has a close relationship with the newly-promoted Premier League club and is confident he will be offered players on loan.

"That's certainly a possibility. I speak closely with Cardiff," he said.

"If they have players they feel would further their development in League Two, then I have no doubt they will give us first option on those players."

Newport completed their third new signing of the close season last week with the capture of centre-back Harry Worley on a free transfer.

Former Chelsea trainee Worley, 24, joins Adam Chapman and Chris Zebroski in moving to Newport, who are preparing to return to the Football League for the first time since 1988.

Edinburgh feels he needs to add another two outfield players and a goalkeeper to his squad, one of whom could be Curtis Osano.

The 26-year-old right-back was released by AFC Wimbledon at the end of last season, having made 17 appearances for the League Two club.

Edinburgh, who worked with Osano while manager of Rushden & Diamonds, said: "Once I knew of Curtis' availability he was one I made contact with and have done during the summer.

"He's one of two or three we're trying to progress with. He's certainly a player that excites me and one I feel that would be a fantastic acquisition."

Edinburgh has invited four goalkeeper to train with the squad during pre-season, having recently released back-up goalkeepers Alan Julian and Joe Perry.

"We need another goalkeeper to give Lenny [Pidgeley] competition for that number one spot," he added.