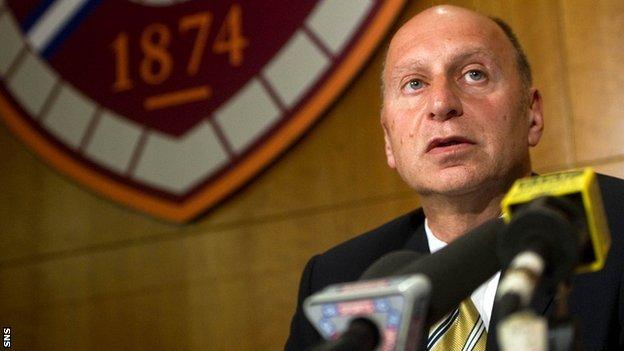 Administrator Bryan Jackson believes it could be a "disaster" if Hearts were handed any kind of fine by the Scottish Football Association.

Jackson is expecting further sanctions to be imposed on the club, who are already subject to a registration ban.

Among the penalties the SFA could hand out are a censure, a fine or an extended signing embargo.

"Any monetary penalty would be a big, big concern in how we'd get over that," said Jackson.

The Scottish Premier League has already handed the Tynecastle side a 15-point deduction for next season, as well as a ban on signing players.

The SFA will establish an independent judicial panel in the next two weeks to assess Hearts' plight and to decide on an appropriate punishment.

"The SFA will come calling next, that's what normally happens," said Jackson. "They let the first sanctions kick in and once that's dealt with then we usually get summoned.

If there are any sanctions that are material in any way, that can be the difference that just puts you over the edge

"We're always given a fair hearing at least so they listen to what we have to say and then they have to decide what sanctions, if any.

"We understand why there has to be sanctions, we understand the rule's there but it's a real pressure on us in a lot of ways.

"If there are any sanctions that are material in any way, that can be the difference that just puts you over the edge.

"The thing that's really disappointing about it is we always feel the wrong people are being punished.

"And the people that tend to be responsible generally for these situations coming about are not there any more. That's what happens.

Jackson laments that it is the staff at Hearts who are bearing the brunt of the cuts, with 14 administrative staff having been made redundant already.

He said: "The people who lost their jobs, were they really responsible for the position the club got itself into? I don't think so.

Jackson is also the administrator at Division Two side Dunfermline where, he says,

"I don't know any reason why they shouldn't apply the same fairness to the Hearts situation," he said of the judicial panel.

"[A monetary sanction] could be a disaster. You're in administration so the cashflow is totally tight.

"The strategy has been to generate enough money from the season ticket sales to keep the doors open, just to get to the CVA.

"You put in an amount that we can't pay and potentially a new owner is going to inherit, can they manage to purchase the shares in the club and take that as an additional debt?"

Hearts have sold about 1,200 season tickets since Jackson appealed last week to fans to meet a target of 3,000 to keep the club going over the summer.