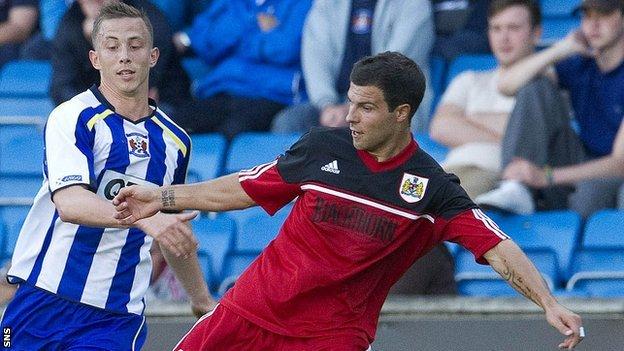 Richard Foster has agreed to join Rangers on a two-year deal after having his contract at Bristol City cancelled.

The 27-year-old had one year remaining on his Ashton Gate deal, having joined from Aberdeen in January 2012.

Foster was loaned to Rangers from Aberdeen in 2010-11 and helped them win the Scottish Premier League title.

"As a footballer you want to win games and trophies and medals. If anything, my time away has just reassured me of how big Rangers are," he said.

"You leave Scottish football and you meet Rangers fans in England and wherever you go and you hear they're getting 50,000 people at home games in the Third Division.

"Everything from Murray Park to the stadium just screams out that they're a massive club.

"A club as big as Rangers should be in the SPL and one of the reasons I want to come back is to get them to where they should be.

"You can only win the division you're in so to win the Second Division would be as big an achievement as winning the SPL."

Foster will join Rangers officially on 1 September when the club's transfer embargo will have expired.

His best displays during his first spell at Rangers were arguably those on the European stage, whereas next season he will play against the likes of Stranraer and Brechin.

He said: "It was one of the things I had to consider but it's a new challenge, it's different.

"At the end of the day it's a game of football you want to win to ultimately win the league.

"You just need to adapt to these things and do your best."

The Dons gave Foster his debut senior debut as a 17-year-old in 2003 and he went on to make over 270 appearances for the Pittodrie side.

He has won three Scotland Under-21 caps and earned a call-up to the senior squad last year but did not feature in the friendly against Slovenia.

Foster joins and in agreeing to join Rangers after the transfer ban ends on 31 August.

Meanwhile, goalkeeper Neil Alexander and forward Kane Hemmings will not be returning to Rangers, with the former deciding not to sign a new contract and the latter being released at the end of his deal.

Manager Ally McCoist hopes to sign a new keeper to compete with Bell, and Foster hopes that player is Craig Gordon, who has been training at Murray Park.

He said: "He's an international goalkeeper.

"Everyone agrees that, when he's fit and playing, he would be in the Scotland set-up.