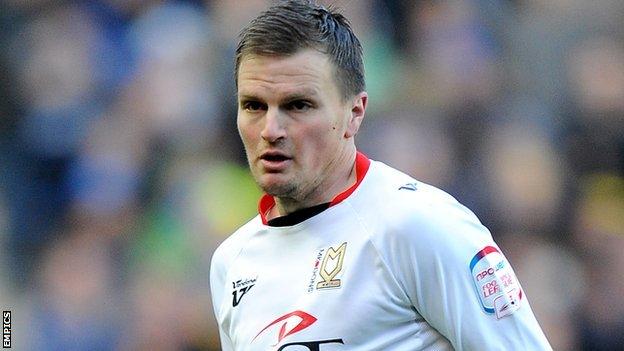 MK Dons boss Karl Robinson has said he is in talks with midfielder Stephen Gleeson over his future at the club.

Gleeson, 24, a central figure in Robinson's side, is entering the final year of his Dons contract.

"He's someone I'm desperate to keep hold of - he knows that. We both wear our hearts on our sleeves and we're having discussions."

There was speculation he could leave last summer and he went on to feature 37 times, despite being hampered by a broken foot from December.

"If I have Stephen Gleeson at this club you've always got a wonderful chance of competing in a lot of leagues," said Robinson.

"I put him on that pedestal.

"He's a Milton Keynes player. There have been no bids for him.

"There have been one or two talks and speculation but he's still wearing our shirt for the time being which is the most important thing."

The 27-year-old left-back was in the final month of his current contract.