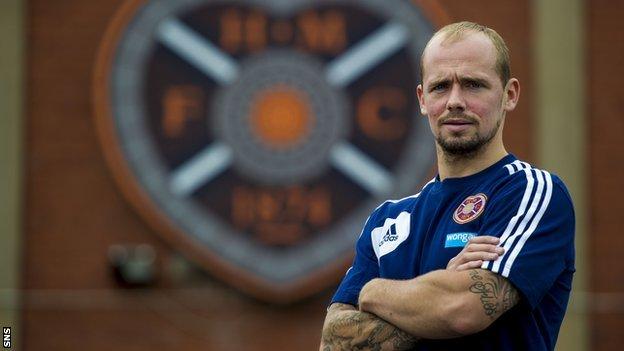 Hearts full-back Jamie Hamill has confirmed he has agreed a wage cut as part of the club's drive to reduce costs after entering administration.

"It has been difficult with the club going into administration," he said.

"But I spoke to the gaffer and my wife about the situation and decided it was best to stay here as I just want to play at Tynecastle.

Hamill missed most of last season as he recovered from a knee injury but returned to first team action in March.

"I have been out injured for so long and missed a couple of cup finals so feel there is unfinished business here for me," he explained.

"We want to help the gaffer out as it is going to be a very young team so hopefully the experienced guys can help us close that gap with us starting the season at minus 15 points [deducted as a result of the club entering administration].

"We need to stick together and focus on starting the season as well as we can."