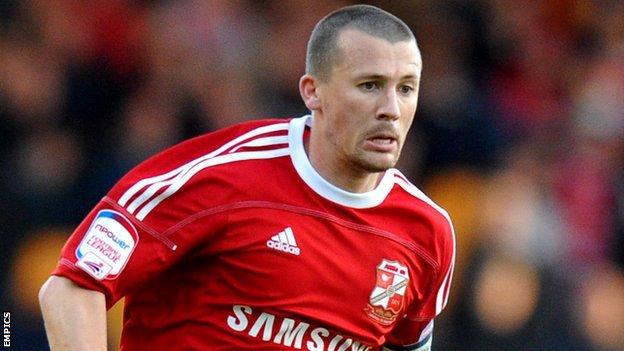 Swindon Town defender Paul Caddis says he is still unclear about his future with the club.

Caddis, 24, is under contract at with the League One side until next summer.

But he has not played for Swindon since May 2012, after falling out with former Town boss Paolo Di Canio. and spent last season on loan at Birmingham.

Asked if he was staying for the long-term, Caddis told BBC Wiltshire: "Honestly, I don't know the way the club is going at the moment."

He continued: "Right now I'm contracted at Swindon and, as always, I'll give 100% until the day I leave."

Birmingham have previously made several unsuccessful bids to take the right-back to St Andrew's on a permanent deal, but Swindon manager Kevin MacDonald says the Blues have cooled their interest.

Caddis made 28 appearances for Birmingham last season and believes it has helped him develop as a player.

"The Championship is, arguably, the toughest league in the world and it's extremely tough for a club to get out of," he continued.

"It was good to test myself at a higher level."

He arrived at Swindon from Celtic in 2010 and captained Town to the League Two title to following season.

Caddis agreed a contract extension last summer but a spat with now Sunderland boss Di Canio led to him being stripped of the captaincy and sent out on loan.

The club is now under new management, with MacDonald having replaced Di Canio in February, and new ownership, following chairman Jed McCrory's takeover in the same month.

And the club's overhaul has hit the playing squad as well, with six first-team players having already departed this summer.

"There's only about nine senior players left, and that's including Louis Thompson and Leigh Bedwell who are still young," added Caddis.

"There's only really Paul Benson, Alan Navarro and Wardy [Darren Ward] who are the old heads.

"It's quite a depleted squad at the moment but they've got time and I'm sure the manager will track some quality players."