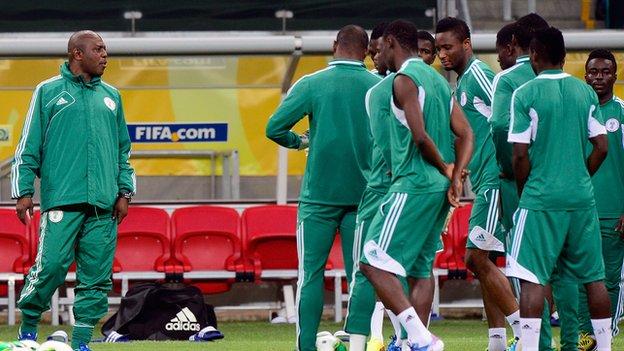 Nigeria are hoping home advantage will propel them to their first appearance at the African Nations Championship (CHAN).

The Super Eagles face Ivory Coast in a two-legged qualifier with the first match taking place in Kaduna on 6 July and the winner of the tie going through to the tournament in South Africa.

Reigning African Champions Nigeria are looking to bounce back from a disappointing Confederations Cup, where they finished third in their group after defeats to Uruguay and Spain.

I definitely think we can do better than in previous years

"The Confederations Cup has been a good learning experience for our home-based players and they have a chance to show that in the CHAN," coach Stephen Keshi told BBC Sport.

"We need to pick all the positive lessons from Brazil and take it into our subsequent games."

Nigeria failed to qualify for the tournament on two previous occasions. but Keshi believes his side are well equipped to make it this time.

He said: "The target is to be in South Africa because we have the players who are now experienced, matured and exposed to big tournaments.

"I think we have a better chance because we are playing at home in the first leg and that it's a big advantage."

But with their one-year unbeaten run in international football over, Nigeria know they will be tested by Ivory Coast.

Former Nigeria captain Keshi has retained all eight locally-based players for the World Cup dress rehearsal, in preparation for the Elephants.

"We have already given them a bigger platform to showcase their talents," Keshi said. "Luckily we have enough time to prepare the team for this, I definitely think we can do better than in previous years."

Nigeria are only competing in the 2014 CHAN qualifiers after reversing their decision to opt out of the tournament.

The Nigerian Football Federation (NFF) announced in April it was withdrawing the team from the qualifiers in order to cut costs, but then made a U-turn in May.