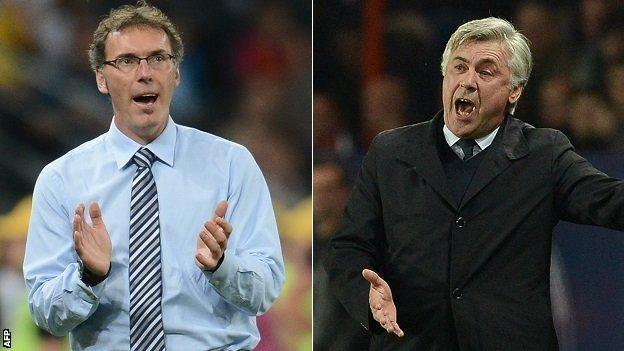 Carlo Ancelotti has taken over as Real Madrid manager, with Laurent Blanc replacing the Italian as coach of Paris St-Germain.

Ancelotti, 54, led PSG to the French title last season but asked to leave the club in May after Real made an approach for him.

He has signed a three-year deal in Spain to replace Jose Mourinho, who left to become Chelsea boss.

Blanc, 47, has agreed a two-year contract at the Parc des Princes.

PSG appeared to be trying to secure a replacement for Ancelotti before letting him go and said they were "delighted" at Blanc's appointment, despite French media claiming he was not the first choice.

He will take charge of the squad on 1 July for the start of pre-season training.

Blanc played for Montpellier, Auxerre, Barcelona, Inter Milan and Manchester United among others during his playing career, and the former central defender was also part of the French side which won the 1998 World Cup and Euro 2000.

As a manager, he led Bordeaux to the 2009 French league title before having a stint in charge of his country's national team between 2010 and 2012.

He will now assume control of a PSG outfit which has become one of European football's major players since being taken over by Qatar Sports Investments in August 2011.

Ancelotti was appointed as the French club's manager in December 2011 but the lure of Real Madrid has proved too hard to resist.

The former Italy international midfielder had spells at Parma, Roma and AC Milan as a player before starting his managerial career with Reggiana.

He went on to take charge of Parma, Juventus, Milan - where he won the Champions League in 2003 and 2007 - as well as Chelsea prior to joining PSG.

Ancelotti has won league titles in England, France and Italy, and Real Madrid will be hoping he can elevate them above Spanish champions Barcelona as well as delivering their first Champions League crown since 2002.