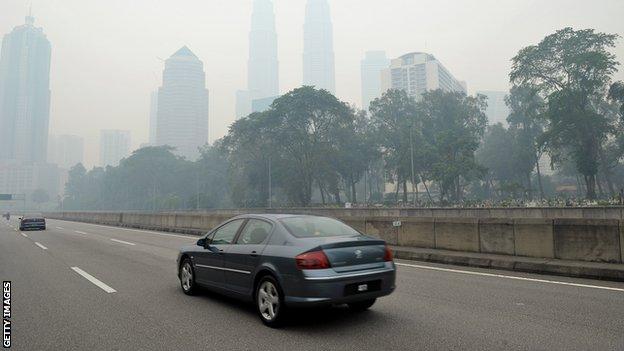 Cardiff City have postponed a promotional trip to Malaysia because of the poor air quality in the country.

Manager Malky Mackay, captain Mark Hudson and striker Craig Bellamy were among the club representatives due to fly to Kuala Lumpur on Thursday.

But the capital has been shrouded in smog, triggered by fires in Indonesia, and the trip has been called off on health and safety grounds.

The club are hoping to rearrange the trip for a later date.

Cardiff's Malaysian chairman Vincent Tan said: "It's with disappointment that the planned visit to Malaysia this week by Malky, David, Mark, Craig and other club delegates has been postponed.

"A schedule of events had been put in place ahead of the opening Premier League fixtures, further raising awareness of Cardiff City Football Club in Malaysia.

"However, due to the current poor air quality in Kuala Lumpur, it has been decided for the welfare of all concerned to delay the trip, re-establishing plans in the future when the manager and players can better interact with Malaysian-based supporters in a suitable environment."

Cardiff have not yet made any additions to their squad since earning promotion to the Premier League by winning the Championship title last season.

Tan has promised to make £25m available to buy new players, with Celtic midfielder Victor Wanyama, valued at £12m, understood to be a top target.

Cardiff's pre-season preparations will include a training camp in Switzerland and the club hope to secure friendlies against high-profile Spanish and Italian opposition before starting their Premier League campaign against West Ham United on 17 August.