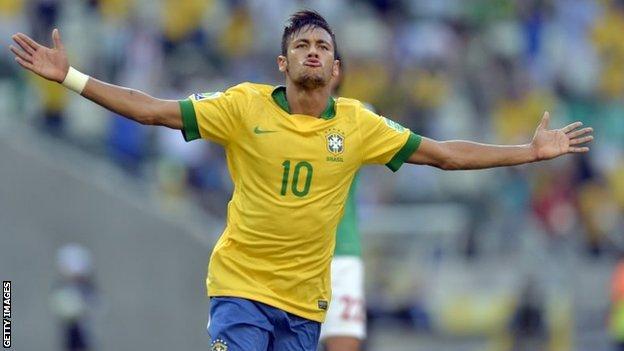 Fifa general secretary Jerome Valcke says the 2014 World Cup will definitely be staged in Brazil, despite admitting he had been involved in talks with the government to decide whether to cancel the Confederations Cup because of protests.

Valcke conceded the demonstrations had overshadowed the tournament, but guaranteed next summer's World Cup would go ahead after he was given government assurances over safety.

"The World Cup will be held in Brazil," he told BBC Sport.

"The first game will happen in Sao Paulo, the final will be in Rio. There is no plan B."

Last weekend more than a million people were reported to have taken part in protests in about 100 cities across Brazil.

Protests began over high transport fares but have also highlighted corruption and the cost of next year's World Cup.

The objectives of this diverse protest movement are very broad, such as demanding better education and health services. A sluggish economy and inflation that is affecting the lives of ordinary Brazilians every day can be added to the mix.

Politicians with high salaries giving jobs and flights to relatives are widely scorned. Inequality and the huge cost of hosting the World Cup and the Olympics are key issues raised by demonstrators alongside corruption, crime and police brutality.

When asked if there had been a point when he had questioned as the protests gathered momentum, Valcke said: "There was one evening on 20 June when we reached a peak in the country.

"The demonstrations had moved from being non-violent protests to a minority of violent protestors who were making a lot of noise and problems. So the following day we had a crisis meeting, including the government, the local organising committee and Fifa just to make sure we were on the same page, in order to end the tournament in the best possible way."

Valcke launched a robust defence of football's governing body during the interview in Rio de Janeiro and said he felt Fifa was being unfairly blamed for Brazil's problems and that the country still had many issues to overcome. "There are many, many things to do in Brazil," he said.

"But the most important thing for us is to detach the World Cup or the Confederations Cup from these problems. We are not the answer to all problems and we are definitely not the reason for such a crisis. We are just part of what Brazil is doing for the next 20 years."

When asked if Fifa was being unfairly portrayed as the villain in Brazil, he added: "Definitely. I am not saying that because I work for Fifa, as secretary general. But the light Fifa is being shown in here, is the wrong one."

During the worst of the protests, Italy were prevented from leaving their hotel in Fortaleza for safety reasons. But Valcke told BBC Sport that no team, or official, had ever asked to leave the tournament because of the problems but that safety levels had been raised as a result.

Had he asked the Brazilian government for extra guarantees on the safety of players and officials as a direct result of the demonstrations? "For sure," he added.

"We always ask that as part of the commitment for the country when they host the World Cup.

"But after these days (the protests) we asked to ensure the highest level of security, not only for the players but the media, the fans, for whoever has the wish to be part of the event. It is part of the responsibility of the state to deliver that high level of security system to protect all of us."

Valcke went on to say that he felt next summer's World Cup might yet be remembered as the greatest of them all, especially if Brazil play well. "What Neymar has given in this tournament is unique. He is an amazing player, a beautiful player," he added.

"If Brazil plays well at the World Cup you have everything to make the best World Cup ever organised.

"It is true that what we expect is the best tournament. If Brazil plays well you will have an incredible World Cup. It is the country of football."