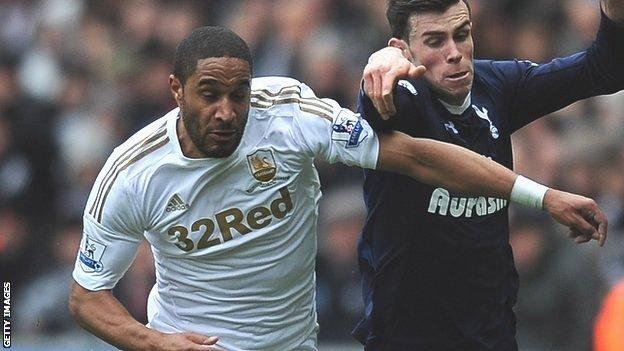 "I've had no phone calls off anybody in connection to Ashley or anybody in our squad - and long may that continue," Jenkins told BBC Radio Wales.

Williams, who extended his contract until 2015 last October, has also been linked with Liverpool and Everton.

Swansea have always maintained they are willing to sell any player for the right price and reason, but recruiting - rather than selling - is their current priority.

Vitesse Arnhem striker Wilfried Bony and Lyon striker Bafetimbi Gomis have emerged as two of "a number of targets", while Jenkins has confirmed an offer has been made to Villarreal to secure another season-long loan deal for Jonathan de Guzman.

The Swans chairman says experience has taught them to "have a few options" when looking to recruit because of delays created by clubs, agents or players themselves keeping their options open.

"There's been a lot of speculation over the last few weeks, initially about our manager, then about players," said Jenkins.

"And I think with our players and our staff reporting back [on Monday, 1 July], it allows everybody a chance to get settled down and start planning and preparing properly for our new Premier League season."

Swansea have completed just one signing since the end of the 2012-13 campaign, with joining on a free transfer from Real Betis.

"In some cases you can get things done early, then others do take a little bit of time."

The Swans' league campaign kicks off at the Liberty Stadium on Saturday, 17 August

And Jenkins wants to be prepared for the arrival of David Moyes' side. He said: "Hopefully by the time of our first competitive game the manager has the squad he wants for the Premier League and Europa League games we've got to look forward to."

Meanwhile, Lee Trundle has returned to the club after accepting an offer to become their first official ambassador.

The 36-year-old former striker, who scored 91 goals for Swansea in 194 appearances over two separate spells, will work on community and charity commitments and will be involved with coaching the club's youth players.