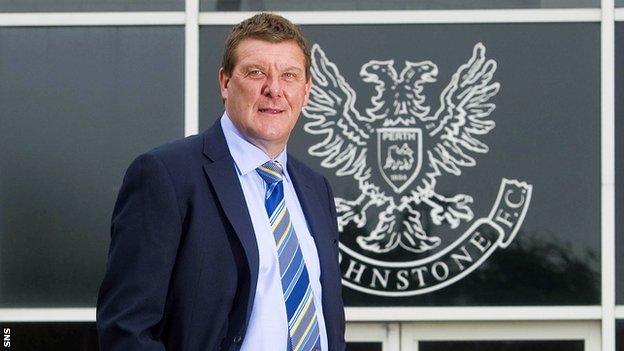 New St Johnstone manager Tommy Wright hopes his first game in charge will be in his homeland but admits it is more likely to be hosted by Rosenborg.

The Northern Irishman's side have been drawn to play either Crusaders or the Norwegian outfit in the second qualifying round of the Europa League.

"It would be nice to go back if it was Crusaders," said Wright.

"We'd fancy Rosenborg to come through as they beat Crusaders 4-0 on aggregate last year and will be favourites."

The away leg is on 18 July before their opponents visit McDiarmid Park on 25 July.

He said: "I certainly know a bit more about Crusaders but Rosenborg are a big side who have been in the Champions League in the past.

"The good thing about the draw is that no matter what team we get, logistically it won't be a problem.

"The fact they both play each other and that Rosenborg are halfway through their season, it gives us a good chance to get them both watched.

"Last season when we played Eskisehirspor in this competition, they were in close season like us and that made it difficult trying to assess them as a team."

St Johnstone's players have declared themselves pleased with the draw.

"Good draw. Rosenborg are a team with a lot of European experience," tweeted full-back Gary Miller.

Saints entered the Europa League at the same stage last season, being knocked out by Turkish side Eskisehirspor.

And right-sided midfielder Chris Millar insisted he was looking forward to the tie no matter who Saints faced.

"Well that's a great draw location-wise, Rosenborg have a great pedigree in Europe so imagine that would be a tough one," tweeted the former Morton player.

"Crusaders would be a great tie with the UK connection. Either way, great games to look forward to."