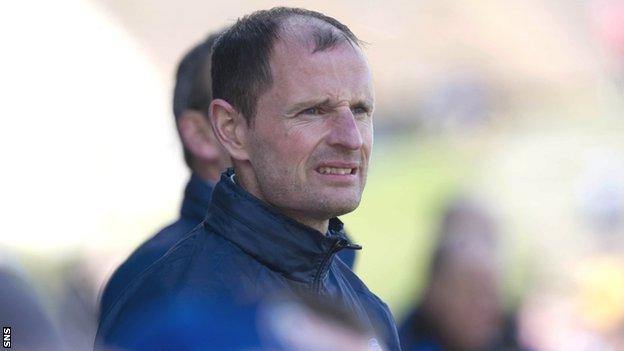 Defender Garry Hay believes new Kilmarnock manager Allan Johnston has earned his chance to show that he can prosper in charge of a top-tier team.

Hay, who is leaving Rugby Park after 18 years and who played beside Johnston for five years, said: "He has played at a high level for all his career.

"He's done a fantastic job at Queen of the South, as a player first, then as a manager.

"The job he did last year, he deserves an opportunity at a higher level."

"Queen of the South were the only full-time team in the Second Division, which gives them an advantage," said Hay.

"But for a striker to score 41 goals [Nicky Clark] and to win the league at a canter, that is very hard to do no matter what level you are at.

"He was at the club as a player so he knows how the club works.

"He'll get support from the fans as the manager of the club. Everybody just wants what's best for the football team."

Hay recalled that when Jim Jefferies and Billy Brown were at the helm at Kilmarnock they allowed Johnston to take some of the training sessions while he studied for his Uefa 'A' licence.

He was impressed with the way Johnston handled those, highlighting his down-to-earth character and appetite for work as key attributes.

"He loved to roll his sleeves up and get stuck in as well," said Hay.

"He was a very good technical player but he liked working hard.

"He demanded the best on the pitch from his team-mates and I think he has taken that into management."

Hay, whose entire playing career has been at the Ayrshire club, reckons Johnston will immediately set about raising morale at Kilmarnock before assessing the squad.

He added: "Allan will come in and have his meeting with the players and set his stall out. It will be about getting some positivity about the place.

"It's a big task. Like all other teams, everybody's cutting their cloth. Even at Queen of the South he's learned how to use a small budget and that will stand him in good stead at Kilmarnock.

"He'll have to do a bit of wheeling and dealing. The club needs a couple of players in, they are weak in some areas, but there are some exciting young players coming through.

"It's about getting the right blend between them and the more experienced players like James Fowler, Manuel Pascali and Sammy Clingan. He's got the nucleus of a good team."