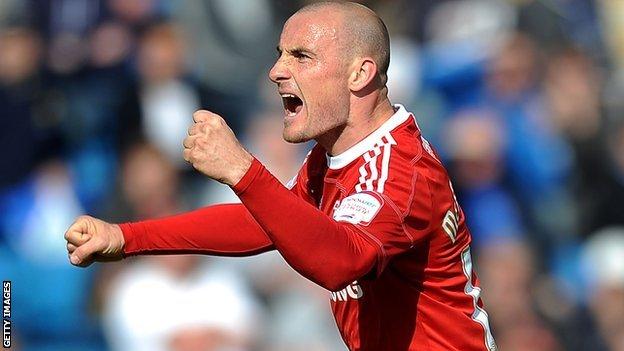 Midfielder McCormack, who made 98 appearances during two seasons at the County Ground, has agreed a two-year deal with the Bees.

Saville has not played a senior game for Chelsea but made three appearances while on loan at Millwall last season.

The 20-year-old will remain at Griffin Park until January 5.

Last season Alan clearly displayed excellent leadership and motivational skills. His experience will benefit the development of the many young players we have in the squad

Mark Warburton, Brentford's sporting director said McCormack "will undoubtedly have a positive impact both on and off the pitch".

"His experience will naturally benefit the development of the many young players we have in the first team squad.

"Alan is a versatile player who will provide cover in a number of positions alongside his more recognised midfield role."

On the loan signing of Saville, Warburton said: "George is a tenacious midfield player who possesses excellent technical attributes which have allowed him to train daily with the Chelsea first team squad for the vast majority of last season.

"He has been on our radar for a long while and when the opportunity arose to secure him on loan until at least early January we had absolutely no hesitation.

"He will bring a real bite to our midfield coupled with the ability to technically maintain good possession and the vision to unlock opposition defences."