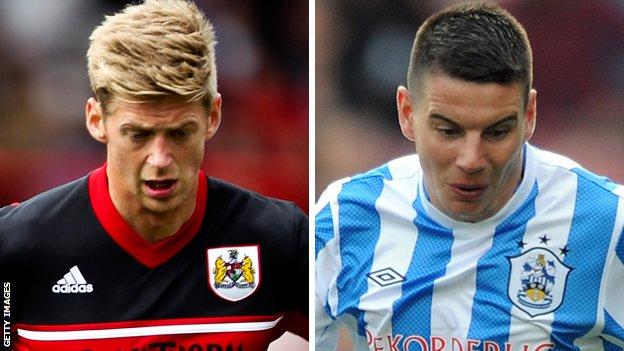 Hammill, 25, who spent four months on loan at Town last season and scored twice in 16 appearances, has signed a three-year deal.

Stead, 30, is rejoining the club where he began his career and has agreed a two-year stay.

The club also have an option to extend the pair's contracts by another year.

Stead left Huddersfield for Blackburn in February 2004 and has also had spells at Sunderland, Derby, Sheffield United, Ipswich and Coventry.

As everyone knows, increasing our goal-scoring threat is the priority for us at the moment

He scored 20 goals in 79 league appearances for Bristol City.

"We need intelligence, we need movement, we need pace and we need presence as well. Jon can certainly link the play; he has presence and experience at this level.

"I have spoken to him about goals; he has always scored consistently but I believe that he can score more than he has done.

"He's a very different player to the one that left this club back in 2004 and he was very popular with the supporters at Bristol City, he was their Player of the Year in 2012. He fits very well as a number nine in the system we want to play."

On Hammill, a product of the Liverpool academy who joined Barnsley before moving to Wolves, Robins said: "I know just how much of an impact Adam can have at Championship level and I understand he showed glimpses of that during his loan spell here last season before I arrived.

"Our job - and the challenge for Adam - is to work very hard on the training pitch and get him playing at a consistently high level, because if we can we have a very exciting player on our hands.

"Adam has lots of ability with the ball at his feet and will fit very well into the style of football we want to play, as he can play on either side or with the main striker.

"As everyone knows, increasing our goalscoring threat is the priority for us at the moment and Adam's arrival is another element of this."