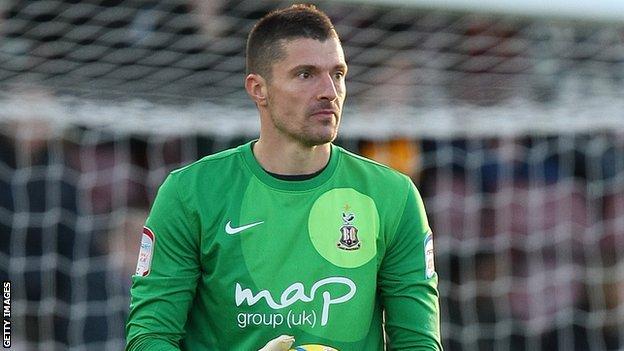 Northampton Town will sign keeper Matt Duke on a two-year deal following his release by Bradford.

Duke, who played 33 times for the Bantams last season, will join the Cobblers on 1 July.

The 35-year-old played nine matches while on loan at Northampton in 2012, keeping three clean sheets, before he was recalled.

"Matt was always our number one keeping target this summer and I'm delighted to get him," said boss Aidy Boothroyd.

The former Derby County, Wycombe Wanderers and Hull player last season helped Bradford to promotion from League Two and also to the League Cup final, producing an outstanding display in the semi-final first leg win over Aston Villa, although he was sent off in the Wembley defeat by Swansea.

Boothroyd added: "Matt needs little introduction really having done so fantastically well for us on loan and then being one of the stars of Bradford's Capital One Cup run last season.

"We know he will settle in quickly as he knows the club and he knows the staff and I think he will be another excellent addition to the squad."