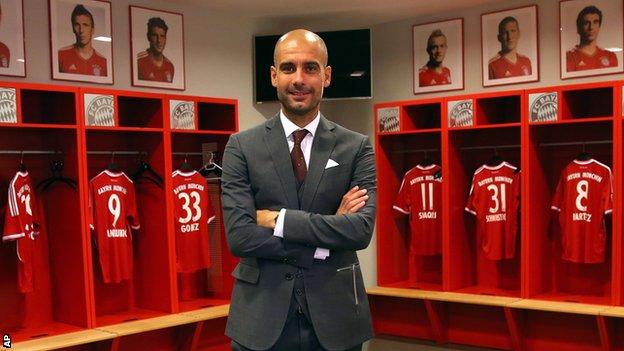 Pep Guardiola believes he is under pressure at Bayern Munich to emulate the success achieved by predecessor Jupp Heynckes.

The 42-year-old Spaniard was speaking at his first news conference as the new coach of the German treble-winners.

"I hope to maintain the level the team played at last season," said Guardiola, who enjoyed four trophy-laden seasons with Barcelona.

"There is lots of pressure. I've got to accept it and be capable of coping."

Guardiola took a year-long sabbatical after leaving Barcelona at the end of the 2011-12 season. He then surprised many in January by agreeing to a three-year deal with the Bavarian club, starting in the summer.

Under 68-year-old Heynckes last term, Bayern became the first German team to win the Bundesliga, the European Cup and the German Cup in the same season.

However, the veteran boss was informed by the Bundesliga club they did not want to extend his contract beyond this summer because of Guardiola's availability.

"We had been working on it for a long time to convince Pep to come to Bayern," chairman Karl-Heinz Rummenigge said.

Barcelona established themselves as the dominant force in club football under former player Guardiola, with two Champions League crowns and three La Liga titles among the trophies claimed by a side containing names such as Lionel Messi, Xavi and Andres Iniesta.

"I am ready," added the new manager, who also spoke German at Monday's presentation.

"My time at Barcelona was wonderful, but I needed a new challenge and Bayern Munich gave me this opportunity."