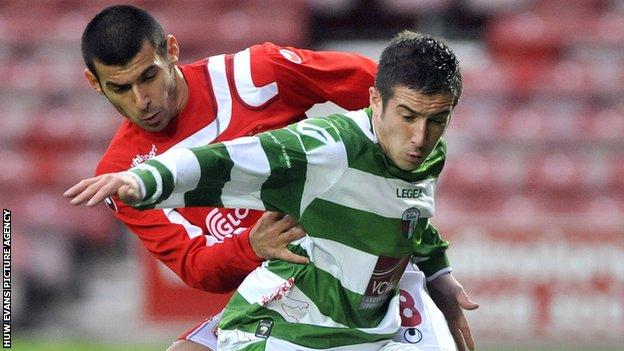 Welsh Premier League champions The New Saints will play Legia Warsaw in the second qualifying round of the Champions League.

Legia were crowned Polish champions for the ninth time last season and were one of the seeded teams in Monday's draw.

The Saints have lost three times against other Polish clubs in previous European campaigns.

The Welsh side will be at home for the first leg (16 or 17 July), with the second leg to follow a week later.

In the Europa League, two of the three Welsh clubs will face Latvian opposition in the first qualifying round.

Welsh Cup winners Prestatyn Town will play Metalurgs, while Airbus UK Broughton have been drawn against Ventspils, who have twice beaten Welsh clubs in Europe.

Bala Town will face Levadia Tallinn from Estonia. All three Welsh Clubs will be making their debuts in European competition, and will be at home for the first legs.

Both Bala and Prestatyn have nominated Rhyl's Belle Vue as their designated ground to play their home ties, so Uefa have decided to bring Bala's game forward to Tuesday, 2 July.

Prestatyn will play two days later, the same time as Airbus will be in action at Wrexham's Racecourse Ground. The away legs will be played on 11 July.

While the Europa League contingent are newcomers to European competition, the Saints have grown accustomed to trips abroad over recent seasons.

Last season, they lost 3-0 on aggregate to Swedish champions Helsingborg in the second round of the competition.

In 2010, the seven-time Welsh champions won a Champions League tie for the first time by beating Bohemians of Ireland. They earned a glamour tie against Belgian giants Anderlecht in the next round, losing 6-1 on aggregate.

Legia will be making their first appearance in the Champions League since 2006, when they lost in the third qualifying round to Ukraine's Shaktar Donesk. Last season, they reached the play-off stage in the Europa League but lost to Rosenborg.