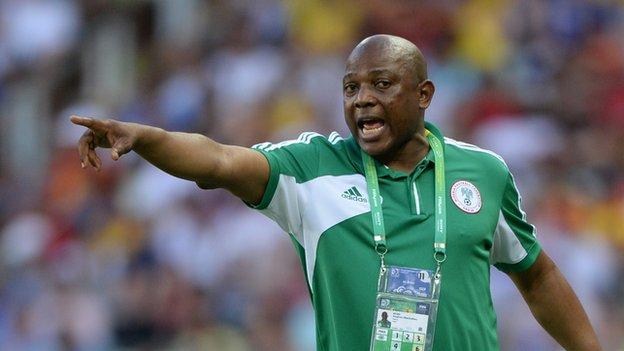 Nigeria coach Stephen Keshi says profligacy in front of goal was a big factor in his side's exit from the Confederations Cup in Brazil.

The African champions finished next to bottom in their group after a 3-0 loss to Spain in their last game on Sunday.

Prior to the defeat, Nigeria beat Tahiti 6-1 and lost 2-1 to Uruguay.

"There's so much anxiety in front of the goal-line when we get there. The good thing is we create chances, but we're not finishing them," said Keshi.

"That's something we need to work on. Hopefully it's going to come quickly."

Nigeria needed to win Sunday's game to stand any chance of squeezing into the semi-finals, but Spain took the honours through a pair of goals from left-back Jordi Alba and a Fernando Torres header.

Nigeria had opportunities to get back into the match but Brown Ideye and substitute Muhammad Gambo both spurned good chances in the second half.

Keshi also felt his players had become "unprofessional" after Torres doubled Spain's lead shortly after coming on as a 60th-minute substitute, but he added that his side were hampered by injuries.

Nigeria lost Victor Moses, Emmanuel Emenike and Ogenyi Onazi prior to the tournament, while Nnamdi Oduamadi was injured against Uruguay and centre-back Kenneth Omeruo had to go off with an injury against Spain.

"You look at the other teams in the tournament, and they have a complete XI of first-team players here," he said.

"I lost four, five key players in the team at the last minute. And today I lost one of my key players at centre-half, which is damaging. But it's football. You have to live with it."

Despite their Confederations Cup disappointment, Nigeria remain on course to return to Brazil for next year's World Cup.

The Super Eagles will move into the final round of African qualifying if they avoid defeat at home to Malawi in their next competitive fixture on 6 September.

Meanwhile, former Nigeria international Jonathan Akpoborie has questioned whether Keshi is the right man to lead the team.

Akpoborie, who won 16 caps, told BBC Sport he is sure Nigeria will reach next year's tournament but feels Keshi does not have the knowledge to compete at the highest level.

"He still has a lot to do to convince me that he is tactically good enough for us to perform well at the World Cup," said Akpoborie.

"Against Spain we played very well but we conceded goals that could have been defended with ease - particularly for the third goal, the mistake was elementary.

"Keshi has done well, maybe we need to give him time and we will improve next year before we get to the World Cup. But what I saw yesterday and at the Nations Cup - the same problems are still evident. I have to ask is it going to change?"