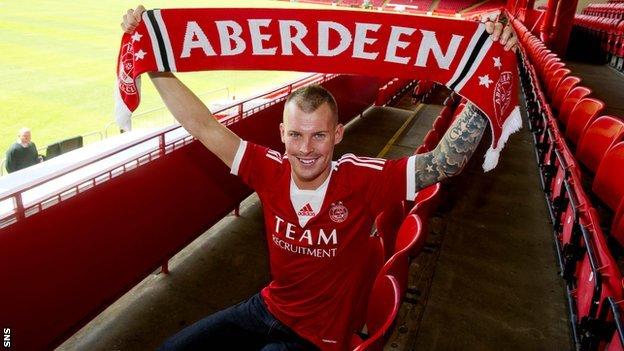 The 22-year-old, who spent a loan spell at Bury last season, was a free agent after being released by Bolton.

"Gregg is a player will give us real pace and good balance, which is something I felt the team needed," said Dons boss Derek McInnes.

The pair join and Calvin Zola at Pittodrie as McInnes continues his squad rebuilding.

who agreed to leave Rangers as part of cost-cutting measures introduced after the Ibrox club went into administration in 2012.

McInnes is confident Wylde will make an impact at the club next season.

"He is a young player who has had a couple of frustrating years with injuries and not playing first-team football but he is a player with great ability and is someone who I am sure will be hugely beneficial to the team," said the Aberdeen manager.

"I'm really looking forward to working with him and continuing his development."

Wylde has won seven caps for Scotland's Under-21 side and scored his only two senior club goals during his spell at Rangers.

The Dons boss said teenage striker Shankland was an exciting prospect for the future.

"He scored a lot of goals for Queen's Park last season and we feel he is an excellent acquisition for the club," McInnes said.

"He will now gain the benefit of training full time and will play regularly at Under-20 level with a view to forcing his way in to the first team.

"Lawrence is definitely one for the future with the potential we see in him. He has shown a great deal of maturity to score as many goals as he did last season in the Third Division and by working closely with Neil Cooper, myself and Tony Docherty, he will only continue to improve."