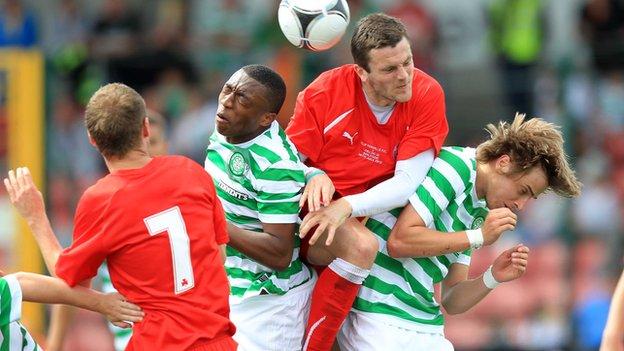 Cliftonville have secured a glamour Champions League second-round qualifier against Scottish giants Celtic after the draw was made in Nyon on Monday.

The first leg is scheduled for Celtic Park on 16/17 July with the return leg on 23/24 July, but that may change to allow Solitude to host the opener.

Derry City will play Trabzonspor in the Europa League second qualifying round.

"It's great for the club, players and supporters. It rounds off what was a fabulous season for Cliftonville.

"We knew we were in with a chance of getting them but to get it is beyond our wildest dreams."

Linfield are away to Faroes Islands side IF Fuglafjordur on 4 July with the second leg seven days later - the winners will play Greek team Skoda Xanthi in the second round.

Irish Cup winners Glentoran travel to Iceland against KR and if they progress the east Belfast side will play Belgian club Standard Liege.

Derry City start their Europa League campaign at the second-round stage and the Candystripes will take on Turkish side Trabzonspor in Turkey on 18 July with the return leg on 25 July.