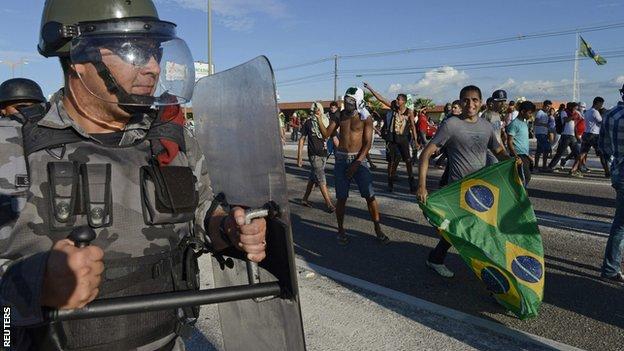 Of all the unimportant things in life, as the wise old saying puts it, football is the most important. Which means, wonderful as it is, that the global game comes below education, health and public transport in any rational list of governmental priorities.

It is the poor standard of these public services which has brought onto the streets. No-one saw this protest movement coming and no-one knows where it will end. Most agree that the complaints are justified.

"The movement," wrote leading commentator Miriam Leitao on Sunday, "is a diffuse feeling of dissatisfaction at the incapacity of the Brazilian State to meet the people's aspirations." The list of grievances leaves next year's World Cup in the firing line - as shown by the mass demonstrations taking place outside Confederations Cup matches.

"Fifa is not the direct target," wrote Victor Uchoa in the Salvador newspaper Correa. "It was Brazil who wanted to stage the World Cup. The target is those who were able to follow Fifa's expensive list of demands like little lambs, but are unable to get a health centre working around the corner."

Those who also, he might have added, are unable to supply quality public transport. Salvador has been building - or at least spending money - on an underground system for 13 years. It is still not operational.

All of this makes the World Cup such an appropriate rallying point for the protesters. There is one expression that is cropping up time and time again on the hand-made banners carried by those in the streets - Fifa-standard.

It a response to the impressive stadiums built at great cost for the 2014 tournament. If we can have Fifa-standard stadiums, they say, we should have a Fifa-standard country, with public services that are every bit as impressive. Especially in the area of public transport, the 2014 World Cup could have done much more to bridge the gap.

This is a story that went wrong right from the start. The battle was well on the way to being lost as far back as October 2007, when the tournament was awarded to Brazil.

The problem was that the country received the World Cup unopposed, on the basis that the competition should be rotated around the various continents. This was a measure devised to enable Fifa President Sepp Blatter to make good on his promise to take the World Cup to South Africa.

The vote - narrowly and controversially - went against him on the 2006 tournament. For 2010, then, he was taking no chances. It was declared to be Africa's turn. 2014 was the next turn of the wheel, and for the first time since 1978, the World Cup would return to its continent of origin, South America.

This was announced in March 2003. Conmebol, the South American Federation, almost instantly announced that Brazil was its only candidate. Colombia later broke ranks and flirted with a separate bid, but never with real aims of winning. And so when the official announcement was made there was no tension or surprise - the only name that could come out of the envelope was that of Brazil.

So the discipline of competition had been removed - which proved so disastrous that the rotation idea was quickly scrapped. Those countries in the race to stage 2018 or 22 had to present detailed plans just to get in the door. Brazil had no such obligation. So back in October 2007, it had not even chosen its host cities.

It gets worse. Brazil would not take responsibility for naming them - after successfully lobbying for an increase from eight to 12 venues. Fifa then had to make the decision. More years were wasted, which had two terrible consequences. Being so slow out of the blocks increased the price of the stadiums - and meant that less time was available for other projects.

In order to stage a World Cup there must be stadiums but corners can be cut on public transport - the event is so special that people go the ground four hours before the game in order to soak up the atmosphere. And so, up and down Brazil, public transport projects were quietly dropped from the 2014 plans. It is little wonder that the issue that sparked the entire wave of protests was an increase in transport fares.

Throw in the fact that Brazilian society was explicitly told back in 2007 that all the money spent on stadiums would be from private sources, and it is hardly surprising that people are angry. It has not turned out that way at all - the funding is nearly all public. President Dilma Rousseff's attempt to explain this situation was probably the least successful part of the 10-minute speech she gave on Friday night.

Subsequent demonstrations - especially in Belo Horizonte on Saturday - would seem to indicate that a significant number of Brazilians believe that the World Cup is costing them too much and not giving back enough in return - a conclusion which was clear some time ago.

"Brazil has been the World Cup host since 2007," wrote Marcelo Sant'anna in Sunday's Correa. "The protests, just like the building work, are late."

No-one saw the wave of protest coming - but it has been coming for years.

Why is it that stadiums in Brazil are rarely sold out and never near capacity? Stadiums like the Maracana, Morumbi, Beira-Rio and Fonte Nova (all pre World Cup reform) come to mind. Given the passion of Brazil for football you'd think games would be sell outs all the time. Do you see this changing after the World Cup and that clubs will be able to enjoy sell out games at the shiny new stadiums?

An interesting and topical question given that increasing crowds in Brazilian stadiums was one of the justifications Fifa gave for awarding it the 2014 World Cup.

Average crowds in the Brazilian Championship are below those of Major League Soccer in the US. A number of explanations; appalling calendar of the Brazilian season, kick-off times to suit TV (9:50 at night, for example), inadequate public transport, fear of violence and supporter mentality (only turning up when the team is winning).

Plus price. Ticket prices are already too expensive, and this is the big fear for the future - that the new, sanitised environment will continue pricing many fans out of the stadiums.