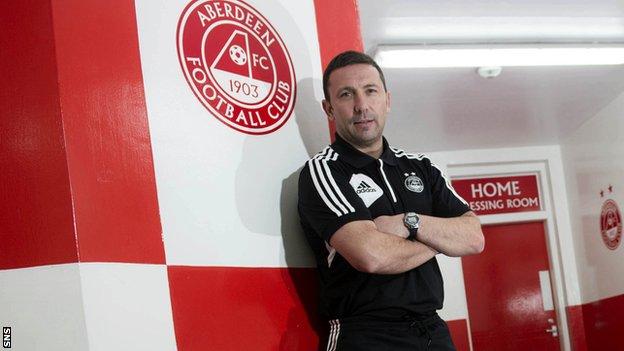 Would a programme synopsis of that description have you opting for a night in front of the telly?

It's genuine. And try this one on for size...

'Dockers race against bad weather to prepare a vessel travelling to West Africa.'

Those were episodes one and six, respectively, of BBC Scotland's observational documentary entitled 'The Harbour', which was screened last autumn.

Whether the sound of it floats your boat or not, this show about Aberdeen's busy industrial port drew viewing audiences of around 360,000 each week.

Oh, how Aberdeen Football Club, based just a couple of miles further up the road, yearn for the days when they could comfortably rely on five per cent of that audience to watch their output.

Rather, the Pittodrie outfit recently took the unprecedented step of announcing that the upper deck of its flagship Richard Donald Stand would be closed during the 2013-14 season so other areas of the ground become more concentrated with support.

Fans being permitted to drape some sort of banner over that upper tier is scant consolation.

The job of fostering something at Pittodrie that can at least begin to rival the popularity of The Harbour falls to Aberdeen manager Derek McInnes.

"We know the impact that a strong Aberdeen team can have," he told BBC Radio Scotland.

"If Aberdeen's successful, the whole of Scottish football feels it.

"No matter how successful some clubs in the SPL are, there is a limit to what they can bring in support-wise and that's frustrating.

"But the Aberdeen fans are there, we just need to get them to believe and fall in love with the team again."

While he talks, McInnes is already slipping, whether consciously or unconsciously, into calling the Dons "my club".

"The reason I'm at Aberdeen, and want to be manager of Aberdeen, is because the demand and pressure to have success from support is exactly what I want to be involved in as well," McInnes said.

"Hopefully, we can get a team on the pitch that can match that expectation.

"For me it's all about trying to get a way of work and practice that stands us in good stead for going forward.

"I expect us to improve this season and how much improvement we can get remains to be seen. But I do expect that, over the next few seasons, we'll have a team that Aberdeen can be proud of."

The Harbour's executive producer, David Harron, is proud of what he's provided for his audience.

A second series has been commissioned for the autumn, and Harron's intention is "to retain some of the characters who had become established", while "adding some interesting new faces".

McInnes's policy for the Dons over the close-season hasn't been far off that.

Short of talking Eoin Jess out of retirement, the 41-year-old former St Johnstone and Bristol City boss couldn't have pulled off a better coup.

And, as far as the interesting new faces go, McInnes offers mascot-sized midfielder Willo Flood, Inverurie-born Barry Robson and striker Calvin Zola, who at 6 ft 3 in, is likely to give the Paul Hanlons and Ryan O'Learys of this world something to think about.

A goalkeeper and left-sided player are likely to follow, as McInnes manages a budget which he reveals is, if you don't mind going back to fractions again, one eighth of what he had at Bristol City when he took over at Ashton Gate.

McInnes feels Aberdeen have been guilty of not working hard enough in the past and is eager to ensure Aberdeen make "a better fist of things in the cup competitions" over and above a better goal-scoring record at home.

He is clear on what's required as he sits at the club's steering wheel.

"Any manager has got to drive," he explains. "They set the tempo at the club.

"Eventually you get to a stage, certainly I had it at St Johnstone, where you don't crack the whip - you've got too many good types in your building.

"More than talent, as a manager you look for personalities and types and guys who look to get something from their training every day.

"We'll be the catalyst, we'll drive it. I'll make sure the players enjoy their training but there won't be a day that they won't think they've learned something."

As McInnes's appearance on BBC Radio Scotland's Sportsound drew to a close, one listener sent in a text which read: "Derek McInnes; a total breath of fresh air. If the team plays as good as he talks, we're winning the treble next season."

His response was light-hearted: "I knew I shouldn't have come in here!"