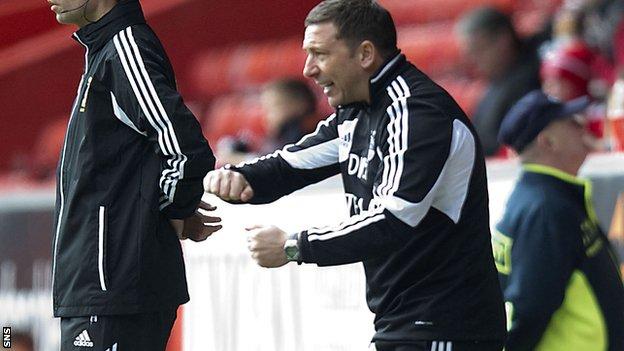 Manager Derek McInnes is emphatic in his belief that it will take hard graft from everyone at Aberdeen to re-claim their 'big club' status.

The 41-year-old is preparing for his first full season as boss at Pittodrie, having succeeded Craig Brown in March.

"It came to me really clear that for us to get a label of being a big club, possibly the second biggest in the SPL, we've got to work harder."

There's other clubs who are doing their job better than us at the moment, but that'll change

However, the former Bristol City and St Johnstone boss insisted this was not a slight on any previous management regime.

"There's certain areas of the football side that I know other clubs are working harder in," McInnes told BBC Radio Scotland.

"The football department is made up of all different aspects; from recruitment, sports science, match analysis, training facilities - the lot.

"There's other clubs who are doing their job better than us at the moment, but that'll change and I'd like to think that we'll be the best of the rest in that department as well."

Nine senior players were released at the end of the last Scottish Premier League season and, to date, McInnes has boosted his midfield options by signing Barry Robson and Willo Flood.

"I'm well aware of the restraints that we have to work under and we've had to act accordingly throughout the close season in terms of moving players on," added McInnes.

"[The] amount of wages [paid to players] coming in will probably be half of what we moved out.

"As a manager you're trying to create optimism and confidence within the support and within your team and I think that's important.

"But at the same time it's tempered by the fact that it's got to be steady progress. There's been too many false dawns for Aberdeen fans.

"Let's try and do something special and get other people looking and saying 'what are they doing at Aberdeen? What are they doing up there? They look bigger, stronger, faster and they're playing with confidence.'

"That, ultimately is where I want us to be."