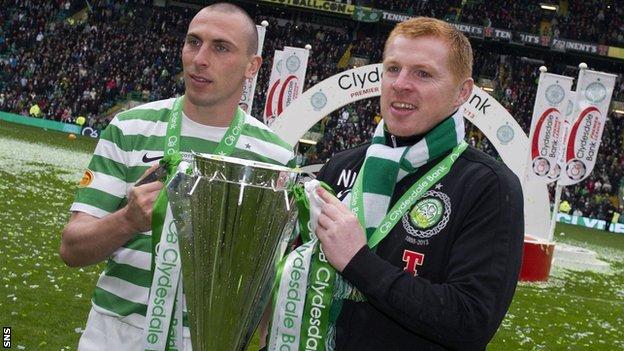 Celtic will face Northern Irish side Cliftonville in the Champions League second qualifying round stage.

The Scottish Premier League winners were seeded for the draw, which took place in Switzerland.

Hibernian will play Irish side Drogheda United or Sweden's Malmo in the Europa League second qualifying round.

Also entering at this stage are St Johnstone, who have drawn either Northern Irish side Crusaders or Norwegians Rosenborg.

Motherwell do not enter the Europa League until the next qualifying round, the draw for which is on 19 July.

Should they progress, they will need to win two more qualifying rounds to reach the Champions League group stage.

However, as league winners, Neil Lennon's side would be seeded in the champions section of the draw for both the third qualifying stage and the play-off round.

Following the draw, Lennon tweeted: "Hell of a draw in the CL qualifier."

Last season, they overcame HJK Helsinki at the third qualifying stage and Helsingborgs in the play-off round, then beat group opponents Barcelona and Spartak Moscow before being eliminated in the last 16 by Juventus.

Saints were beaten by Eskisehirspor in last season's Europa League qualifiers while Hibs have not been in European competition since 2010.

St Johnstone, who have appointed Tommy Wright as manager after Steve Lomas joined Millwall earlier this month, secured a European berth by finishing third in the SPL last season.

Hibs were given a place despite losing the Scottish Cup final as Celtic, who beat them to win the trophy at Hampden Park, had already qualified for Europe.

Saints' and Hibs' first-leg ties will be played on 18 July with the return games scheduled for seven days later.

Both Scottish clubs were the second teams named in the pairing, meaning the first legs should be played away from home.

However, Hibs say they are awaiting confirmation from Uefa about where the first leg will be played.

Motherwell were runners-up in Scotland's top flight and could face Sevilla, Stuttgart or Udinese in the Europa League third qualifying round.