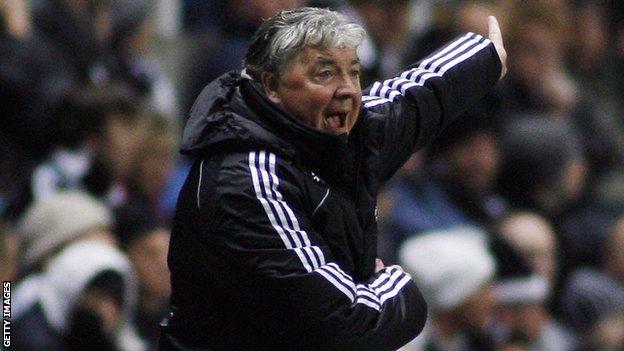 Joe Kinnear says his job as Newcastle's director of football does not put more pressure on manager Alan Pardew.

Instead, Kinnear, 66, told the Sunday Times he will be the first to be criticised by if the team underperform.

"If things are going wrong at the club I am accountable and he [chairman Mike Ashley] will be coming through me and not through anybody else," he said.

"Everybody thinks Pardew is under pressure. He's not. I am. I could get sacked."

Newcastle have appointed a controversial director of football before when Leeds manager Dennis Wise took the position in January 2008, shortly after Mike Ashley bought the club.

Manager Kevin Keegan said at the time: "I am all for the changes and I approve of them."

However, Keegan resigned in September saying: "It's my opinion that a manager must have the right to manage and that clubs should not impose upon any manager any player that he does not want."

Joe Kinnear worked under Wise but the former Chelsea and England midfielder left the club in April 2009 with a statement on the club website posted less than an hour before Alan Shearer was confirmed as temporary boss.

Kinnear revealed his new role last Sunday before the club confirmed his appointment on a three-year contract two days later.

The former Wimbledon and Luton boss says he does not want Pardew's job and met with the manager to provide "clarification" about his position.

In a radio interview on talkSPORT, Kinnear mispronounced the names of some of the Magpies players and also criticised the club's supporters.

"There are 10% that I'm never going to win over, that's the point I was trying to make, but I regret what I said and if I offended any Newcastle fans I apologise," explained the ex-Tottenham defender.

Kinnear was Newcastle's interim manager when he succeeded Kevin Keegan in September 2008 before taking on the role on a permanent basis.

He had to give up the position in February 2009 after he was taken ill with heart problems and Chris Hughton took over on a caretaker basis before Alan Shearer was placed in temporary charge for the final eight games of the season.

Shearer, Newcastle's record goalscorer, won one, drew one and lost five of his seven games in charge as the team were relegated from the Premier League.

The Match of the Day pundit has reacted strongly against Kinnear's appointment and said: "People are laughing at the football club I support. And that sickens me."

But Kinnear responded by saying: "What Shearer says is diabolical. This is a guy who hasn't got a clue about coaching.

"In the last game of the 2008-09 season he came up with the master idea of playing Damien Duff at left-back.

"Damien is one of the best left-wingers in the business, but can't tackle. And we went down with an own goal from Damien.

"Shearer is being disrespectful to me. I am entitled to fight back."