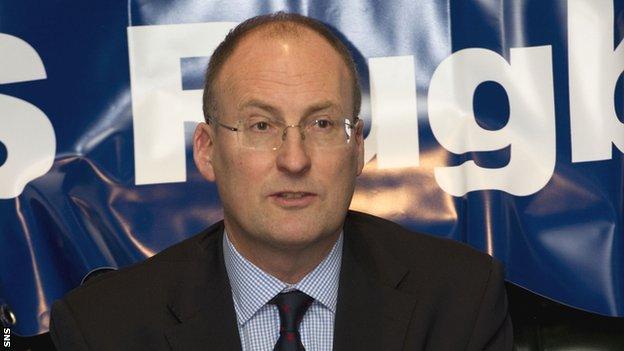 Gordon McKie, the former chief executive of Scottish Rugby, is leading a consortium of investors from London in a bid to take over at Hearts.

McKie was also involved in a bid to take control of Rangers last year, when they too were in administration, with

BBC Scotland understands McKie has also been in contact with Sale Sharks owner Brian Kennedy about the Hearts bid.

Kennedy was also part of the failed attempt to take over at Ibrox.

Unable to pay their bills, including players' salaries and tax demands, Hearts were placed in administration at Edinburgh's Court of Session last Wednesday.

One of its administrators, Bryan Jackson, told BBC Radio Scotland on Saturday that he was confident Hearts fans would meet the target of buying 3,000 season tickets within two weeks to generate enough cash to keep the club going over the summer.

Fourteen administrative staff have been made redundant and two players, Jamie MacDonald and Ryan Stevenson, have agreed to take pay cuts.

Teenage full-back Kevin McHattie has also indicated he will take a drop in salary, while manager Gary Locke is confident that Jamie Hamill will become the third senior player to consent to a pay cut.

"We are nearly there but we meeting tomorrow to finalise things," Locke told the club website.

"It's not the sort of thing a snap decision can be made on but the signs are encouraging."

Jackson repeated that two senior players and two from the youth team are set to lose their jobs and indicated that one other senior player was in danger of being made redundant if he did not agree to a salary reduction.

One of the players expected to be cut adrift is captain Marius Zaliukas, who is only under contract until August.

Locke's team will start next season in the top flight with a 15-point deduction.