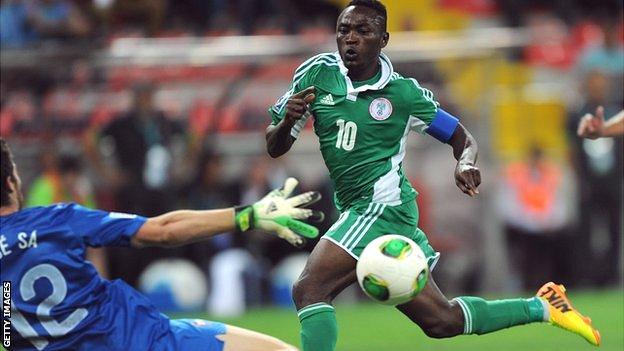 Ghana and Nigeria will hope to improve on their opening displays at the Under-20 World Cup in Turkey, after both teams began their campaigns with defeats.

Former champions Ghana slipped to a disappointing 3-1 loss against France - their first-ever defeat at the group stage.

Nigeria were beaten 3-2 by Portugal.

Ghana coach Sellas Tetteh, who managed his side to the 2009 title, blamed their loss on defensive lapses.

It was a keenly contested game but unfortunately we lost, this was not what we had hoped for

"It's not good that we lost, but I believe there were a few things there we could take home," he said.

"We had a wonderful first half, but we were a little bit sloppy midway in the second half.

"We also conceded [an] early goal. That created a lot of problems for us. We finished the game stronger and that is positive.''

France took the lead on the hour mark through Geoffrey Kondogbia, with Yaya Sanogo doubling the lead shortly after.

Christophe Bahebeck hit a third before Yiadom Boakye scored a late consolation for the Black Satellites.

The game was the West Africans' first at the tournament since they triumphed in the 2009 final. They failed to qualify for the 2011 edition.

Nigeria coach John Obuh, meanwhile, immediately turned his attention to the Flying Eagles' next game against Cuba, after watching his side's opening defeat to the Portuguese.

"It was a keenly contested game but unfortunately we lost, this was not what we had hoped for," Obuh said.

"We have to take the defeat in good faith so as to face the next game because we have to qualify to the next round."

The Portuguese led 2-0 at the break, courtesy of two first-half strikes from Bruma and Aladje, before Nigeria captain Abdul Ajagun scored twice in 10 minutes to draw the Flying Eagles level.

Bruma then hit his second of the game in the 69th minute to give the Portuguese the win.

Ajagun also called for an improvement ahead of the Flying Eagles' second Group B game against the Cubans on Monday.

"We are all disappointed we lost the game, but we are also looking forward to our next game against Cuba.

"We will improve in our next game and score the goals that will get us back in the competition."

South Korea came from behind to beat Cuba 2-1 in the other Group B opener, while the USA slipped to a 4-1 defeat at the hands of Spain.

In Group D, Mali had to settle for a 1-1 draw with Paraguay in their opening match.

Egypt will hope to pick up Africa's first win of the competition, when the Young Pharaohs face Chile on Sunday.