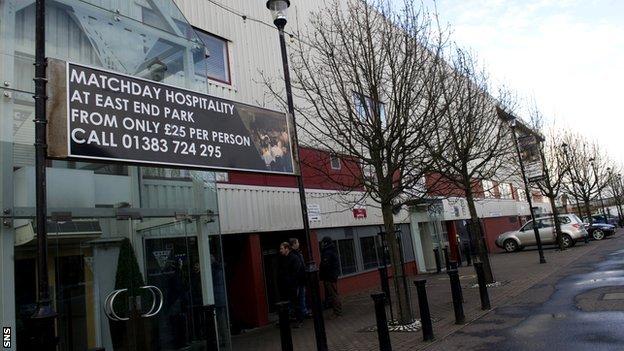 Dunfermline administrator Bryan Jackson hopes to have a preferred bidder for the club by the middle of next week.

Fans' group Pars United are vying to take over the ailing Fife outfit, along with another anonymous party.

"I've got meetings with both interested parties to go through the conditions, some of which are not acceptable," Jackson told BBC Scotland.

"We really have to identify one quickly because we have a provisional date for our CVA meeting on 12 July."

Jackson's firm BDO decided to proceed with the offer of a company voluntary arrangement following a meeting with the club's creditors last week.

But, to complicate matters, the company which controls East End Park stadium is also in the hands of administrators.

"Hopefully, next week we will have a preferred bidder out of the two," Jackson added.

"It's been frustrating that one bidder wants to remain confidential and I'm not happy about it, but I have to respect it.

"Of course, it makes fans very suspicious and I appreciate that.

"But they have to appreciate that I have to keep confidentiality if that is a condition.

"The added complication we have is the administrator for East End Park will have to be happy with who we want to go with.

"There is no point in getting the stadium but not the club and vice versa."

Pars United's fund-raising campaign has been widely publicised, while the rival offer remains shrouded in mystery, with Jackson admitting that their proof of funding "has not yet been fully evidenced".

However, he did add "our feeling is that both parties are credible bidders".

Dunfermline will begin next season in Division Two, having been relegated in the play-offs after suffering a 15-point penalty for entering administration.

And the club's Scottish FA-imposed transfer ban is set to remain in place until at least the end of the year.