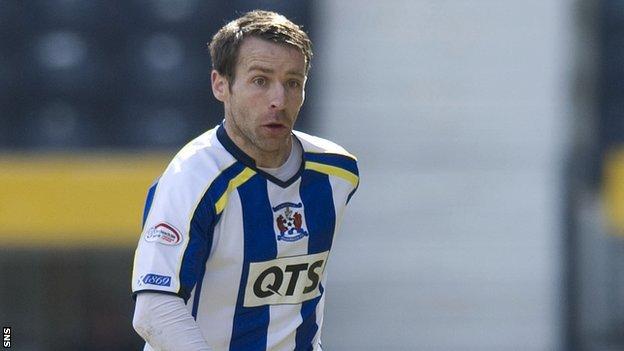 Kilmarnock defender Garry Hay has turned down a player-coach role at League One club Oldham.

The left-sided player was told he does not have a future at the club this week after 18 years at Rugby Park.

And former team-mate Lee Johnson, now boss at Boundary Park, offered him a move, which Hay rejected for family reasons.

"For me, at this moment, it's not something I could do," Hay told BBC Scotland.

"The way I've weighed it up is that I'd have to leave my family, and I've got a young boy at five years old.

"I'm just not prepared to do that. At the end of the day, family's everything."

Although Hay did admit he would have liked to have teamed up with Johnson again.

"It would have been fantastic to work with him and I think Lee could do very well," he said.

"I'm hoping to stay up here and possibly play on up here or maybe look into coaching or management up here."

The 35-year-old also explained that previous Killie manager Kenny Shiels had offered him a coaching role at the club.

"I had a meeting with the chairman when the season ended," he said.

"Kenny was still the manager at that point and he'd made it clear he wanted me as a player-coach, which was something that I was really keen to do.

"After that I went on holiday and during my holidays Kenny had been mutually agreed to move on.

It was at the point that Oldham expressed an interest in Hay, that he was informed his Kilmarnock career was over.

"I spoke to the chairman and he mentioned that it might be better to move on," he said. "That there wasn't a sustainable, full-time role for me at the club."

However, Hay insisted he was not upset at the manner of his departure, over the phone.

"That didn't bother me," he said. "I've got no ill-feeling towards the club, I just want what's best for the club.

"It's just one of those things, I've had 18 fabulous years at Kilmarnock.

"I've supported them boy and man and it's been a privilege to pull that shirt on."