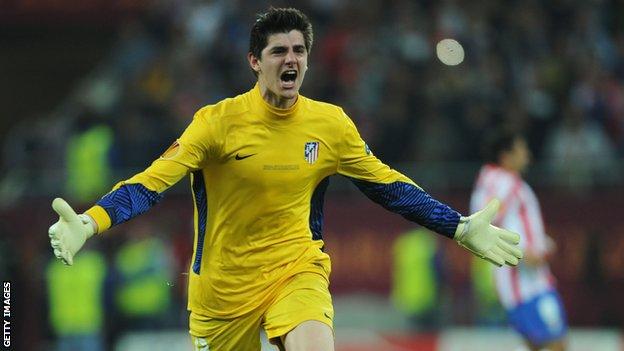 Courtois, 21, signed a five-year contract with the Blues in 2011 when he moved from Genk for an undisclosed fee.

He has since spent two successful campaigns in the Spanish capital, winning the Europa League, Uefa Super Cup and Copa del Rey.

"I'm very happy because it's what I was wanting," the 6ft 6in Belgium international told Atletico's website.

"I've always said that next season I wanted to continue at Atletico and compete in a competition as important as the Champions League, having achieved qualification in such a brilliant way.

"I've only thought about continuing to enjoy the incredible fans that we have and I hope that we can continue giving them plenty of joy."

Courtois - who is yet to feature in a competitive game for Chelsea - was brought in by the Vicente Calderon outfit to replace David De Gea, after the Spaniard was sold to Manchester United.

His superb form last season was rewarded with the Zamora Trophy, an award which is given to the goalkeeper with the lowest goals-to-game ratio in La Liga, after he conceded 29 goals in 37 appearances.