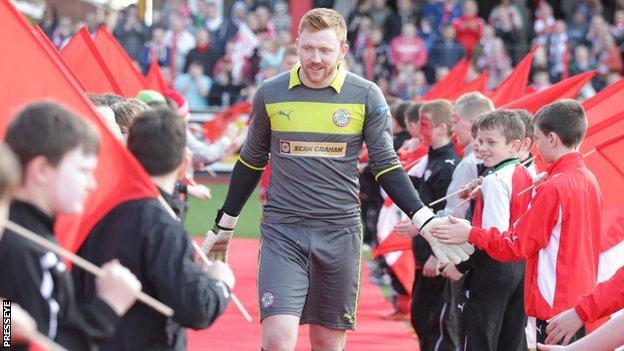 Premiership champions Cliftonville have received a significant boost with the news that highly-rated goalkeeper Conor Devlin is to remain with the club.

Devlin recorded 17 clean sheets in 43 appearances during an impressive debut season, playing an integral role in the club's first league title for 15 years.

The 21-year-old also collected the Northern Ireland Football Writers' Young Player of the Year Award in May.

The former Manchester United keeper had been out of contract this summer.

Devlin also played a significant part in the Solitude club's League Cup triumph in January, but was keen to assess his options before committing himself to the Reds.

The stopper has represented Northern Ireland from Under-16 to Under-21 level and was in the same Manchester United side as recent Cliftonville recruit Chris Curran.

"I had a very enjoyable first season here and I'm looking forward to helping Cliftonville win more silverware in the future," said Devlin.

"When I first joined, I said I believed we could go on to really impose ourselves on the league and do well in the cup competitions, which is exactly how it's turned out. We're all hungry for more, though, and I'm very pleased that I'll be staying to hopefully play my part."

"Conor was very solid throughout last season and, as has been said of him repeatedly in the past, is as meticulous and professional as they come," enthused Cliftonville manager Tommy Breslin.

"He has been a pleasure to work with and it's no exaggeration to say he won us a fair share of points on his own en route to winning the League title."

Breslin has also added former Portadown midfielder Joe McNeill to his squad as he plans his side's defence of the Gibson Cup.

The Reds return to training on Saturday and will be part of the draw for the qualifying rounds of the Champions League on Monday.